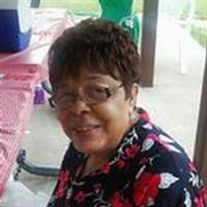 On November 26, 1931, Zenobia Doris Elms was born in Mckamie, Arkansas to George and Zenobia Edwards, who proceeded her in death. She was the seventh child of eight children. Five siblings, proceeded her in death; Avon Nicks, Thares Edwards, Vivian Hill, James Edwards and George Edwards and one grandson, Brandon Hogan. Zenobia graduated from C.S. Woodard High School in 1949. She was class Valedictorian and an avid athlete and sports fan. In high school she played forward on the basketball team. She then attended Secretarial school and graduated in 1951. Upon completion, she worked in a dental office. Zenobia joined Friendship Baptist Church in Stamps, Arkansas where she received Christ in October 1943 under the pastorate of Rev. M. W. Russ. She became a choir member after conformation by water baptism. After leaving Arkansas she moved to Pittsburg, California where she met and married Oiste Elms, who proceeded her in death. Her final earthly residence was Detroit, Michigan. Zenobia was a faithful member for over 50 years at Pine Grove Missionary Baptist Church. She sang and directed in several choirs and played the piano for Sunday school. She served on several auxiliaries which include the Missionary Society where she served as president, and also a member of the Calvary District Bridge Builders. Zenobia retired from the State of Michigan in 2002. Zenobia was a champion bowler and a member of numerous leagues and even competed on the television show “Beat the Camp”. She bowled until the age of 81 years young. Zenobia really enjoyed watching the Detroit Pistons and Family Feud. An excellent cook and baker, she loved feeding family and friends. Faced with confinement and failing health, Zenobia relinquised her responsibilities at church. She heard the voice of God say, job well done good and faithful servant. Zenobia received her wings and went home to be with the Lord on Wednesday, February 10, 2016. Those surviving to cherish her memories are her nine children; Deborah Tunstull (Wayne), Rhonda Minter (Garrett), Dennis Elms, Oistina Holis, Doris Watson (Bruce), Otis Elms, Vanessa Hogan, Andrea Brown (Reginald) and Cornell Elms. Two sisters, Ozeal Warren of Pittsburg, California and Wilhelmena Lemons of Ankeny, Iowa and an honorary sister, Mozelle Hill. Nine grandchildren, four great grandchildren and a host of nieces, nephew, cousins and friends.

The family of Zenobia Doris Elms created this Life Tributes page to make it easy to share your memories.

Send flowers to the Elms family.