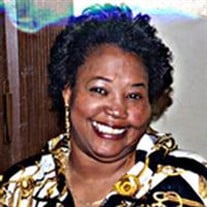 The Scroll of Life Ms. Yvonne D. Hall was born May 3, 1950 to Mrs. Coreaster Rodgers-Murphy and the late Forest Jennings of Akron, Ohio. Yvonne was affectionately called, “Skeeter” by family and friends. She came to Albion, Michigan at the age of 4 with her mother. “Skeeter’s” life was tremendously blessed with love. She had a strong passion for her family. She was blessed to have a step-father she loved and cherished as a father, the late; Mr. Henry G. Murphy. According to “Skeeter” Henry was her god-send because he saved her hide many times. She stated that he taught her to have good work ethics and to provide for her family. She was preceded in death by her father, step-father, brothers; Elijah Jennings, and Phillip Murphy, and sister DeLinda Jones. Yvonne was educated in the Albion Public Schools District. She also, attended Lansing Community College, Lansing, Michigan. She graduated from CACS with an apprenticeship in welding for women. Yvonne was employed by ASC Automotive, Lansing, Michigan, Lear Inc. Marshall, Michigan, the State of Michigan, a Foster Care Parent, and Home Health Care. Yvonne was a child of the Most High God. She accepted Jesus Christ as her Lord and Savior at an early age, and was a member of the Church of Christ. She was an active member at the East Chestnut Street Church of Christ, Albion, Michigan. She served on the Usher Board as the secretary, and was the church secretary. Yvonne was willing to work in any position in the Church. She remained active and faithful to the Church until her health began to fail. Yvonne met and married Irving Lee Hall, Sr. (preceded in death) and to this union four children were born. Yvonne was an active member of the Albion Branch NAACP, served on the Executive Board, and was a Supervisor for the NAACP Youth Chapter. She enjoyed crocheting for her family and friends. She loved to bake and send Birthday, Christmas and Anniversary Cards with tasty recipes enclosed to everybody. Yvonne enjoyed reading and studying the Bible. There was no greater love than Yvonne and her beloved mother, they were kindred spirits and during this life journey they were inseparable and shared an unbreakable bond. She also loved her children and grandchildren and would spend endless time doing creative activities with them. On January 18, 2016 Yvonne’s soul returned back to God while at Borgess Hospital in Kalamazoo, Michigan, surrounded by her loving mother, children and siblings. Yvonne leaves to celebrate and cherish her life, her mother; Coreaster Murphy of Albion, Michigan, children; Irving L. (Ruth) Hall of Detroit, Michigan, Corey (Karen) Hall of Westland, Michigan, Delana Hall of Albion, Michigan and Katina Hall of Lansing, Michigan, Demetrius and Demarcus (Teatrice) Hall, and Jermaine (grandson reared by Yvonne) of Albion, Michigan, step-mother; (Peaches) Gertrude Jennings, Detroit, Michigan, five sisters; Rosa L. Stewart of Huntsville, Alabama, Patricia (Earl) Shores of Elyria, Ohio, Debra Jennings, Iris D. Jennings, and ReNee Jennings-Jeffries of Detroit, Michigan, five brothers; Forest N. Jennings, Phillip M. (Tracie) Jennings, Dwight Jennings, Carl K. (Jackie) Jennings, and Stephen Jennings all of Detroit, Michigan, uncles; Jimmy L. (Donzella) Rodgers of Akron, Ohio, William (Magalene) Murphy, Franklin (Sue) Murphy of Albion, Michigan, aunt; Bena Harris of Madison, Tennessee, special cousins; Addie Chatman, Cindy Terry and Lauren Palmer, and best friend; Pat Brown, eighteen grandchildren, eighteen great grandchildren, two brother-in-law’s; Minister Bradford (Evelyn) Hall, and Minister Kirkland (Barbara) Hall, sister in-law; Marlene Hall and a host of nieces, nephews, cousins, friends, and other relatives.

The Scroll of Life Ms. Yvonne D. Hall was born May 3, 1950 to Mrs. Coreaster Rodgers-Murphy and the late Forest Jennings of Akron, Ohio. Yvonne was affectionately called, &#8220;Skeeter&#8221; by family and friends. She came to Albion, Michigan... View Obituary & Service Information

The family of Yvonne Delores Hall created this Life Tributes page to make it easy to share your memories.

The Scroll of Life