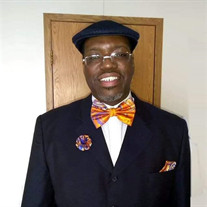 On June 29, 1964, God allowed Willie and his twin who died at birth to be entrusted to the loving care of their late parents, Joseph Jones, Jr. and Mother Annie Ruth Jones. Willie was the nineth of eleven children. He was educated in the Detroit Public Schools. He went on to obtain several different jobs. He worked for the Jackson Michigan Public Transportation, which he recently ended due to medical reasons. Willie loved playing the organ (keyboard) every chance he got. Never having any education or special training, he was gifted to read and play music. He was also known as the Minister of Music to many churches throughout Michigan and other states. Oftentimes he would take his daughter Marcaela a long side him to play the drums. He was so glad to have her with him. Willie gave his life to Christ at a young age and was baptized. As he grew in life, he also grew in grace. He became a mighty man of faith and served the Lord with all his heart. His love for the Lord enabled him to walk in the office of an evangelist, bring all who would come with him to church to learn of Christ. He elevated to Elder and shortly thereafter he excepted the call of Pastor. Willie was ordained Pastor, September 16, 2012 by Bishop DW Claiborne of Detroit, Michigan, at Pentecostal Church Inc. He was on fire for the Lord, teaching and preaching the word to everyone he encountered. He worked with Men Ministries, Shelters, and the Homeless. He had just a Love for Gods Children. During his life Willie strengthened and encouraged countless others in their walk with God. Willie had a special compassionate Love for his only daughter Marcaela and his two grandsons Quintrell and LaQuan who meant the world to him. He had great Love for his whole family. All he wanted was for everyone to get to know the Lord and his goodness of serving him. Our beloved brother Pastor Willie Jean Jones was called back home to glory on Thursday, May 14, 2020.He was preceded in death by his parents; Joseph and Annie Ruth Jones, three brothers; Timothy, James, and Darryl, and one sister; Elizabeth. He leaves to celebrate his life, a loving daughter; Marcaela Thaxton, two grandsons; Quintrell Thaxton and LaQuan Thaxton, two brothers; Larry T. Middlebrooks and Deric Jones, three sisters; Anna M. Reed, Cordelia Middlebrooks, and Denise Hill, along with a host of special nephews, nieces, family, cousins and life-long friends.

On June 29, 1964, God allowed Willie and his twin who died at birth to be entrusted to the loving care of their late parents, Joseph Jones, Jr. and Mother Annie Ruth Jones. Willie was the nineth of eleven children. He was educated in the Detroit... View Obituary & Service Information

The family of Willie Jean Jones created this Life Tributes page to make it easy to share your memories.

Send flowers to the Jones family.