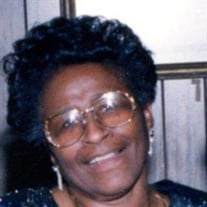 The gates of Heaven opened and summoned up a very beautiful dear solider; Willie Mae (Puddin) Hicks-Dunlap. She went to be with her Savior on October 23, 2021. She was born May 2, 1929 in Sherrill, Arkansas to MB and Viola Hicks both who preceded her in death. She was also preceded her death by three sisters; Arzell Williams, Rosetta Harrell, and Gracie Dentmond, one brother; MB Hicks, Jr, one daughter; Audrice Kay, two grandchildren; Bronze and Mario, two great great-grandchildren; Lamar, Jr. and Tristan, a son-in law; David Givens, Sr. Willie Mae was Baptist at the age of 14 at Plum Bayou Baptist Church in Arkansas. In 1951 her then husband William C. Moore, Sr. moved her and their three children to Jackson, Michigan. In 1952 Willie Mae became a member of Lily Missionary Baptist Church under the leadership of Pastor GW Wade and continued her membership under Pastor James L. Hines who referred to her as one of the Jackson Five. During her membership with Lily she was a faithful solider working on the General Usher Board, President of the Usher Board and for many years handled the culinary for Lily Missions after School Program. She received numerous awards during her lifetime with Lily. Her cooking career started with her family and soon blossomed to Mercy Hospital and continued on to Foote Hospital where she retired. Family and friends really loved her cooking whether it was fried chicken with greens, her special cornbread, sweet potatoes, homemade rolls, banana pudding or peach cobbler. Her sons will especially miss the meals she would prepare, calling them say “The Kitchen Is Open” and yes, sometimes the daughters were included. To pass time she would sit on her porch watching the events of each day unfold on Robinson Street. Puddin enjoyed helping others and taking care of her grandchildren and great grandchildren along with handing out treats to the neighborhood children. She leaves to cherish her memory, four sons; William (Joann) Moore, Jr., Darnell Moore, Melvin (Jennifer) Moore who was her loving caregivers and Pearlie Moore all of Jackson, Michigan. three daughters; Cathy Moore also part of the caregiving team, Jean Givens both of Jackson, Michigan and Denedra (Walter) McIntyre of Hawthorne, California, five sisters; Lucille Shelmon of Toledo, Ohio, Allean Hicks of Jackson, Michigan, Altha Mae Pickett of Birmingham, Alabama, Vivian Hicks and Melba Hicks both of Jackson Michigan and; one brother; William Melvin (Joyce) Hicks, Sr. of Jackson, Michigan; twenty grandchildren, thirty-three great grandchildren and twenty great-great grandchildren, her BFF cousin; Mary Bell Mayle, her twin; Odie Trice, very special friends; Ruthie Walker, Nora Reddick, Florestine Reese, and Kourtney Wade, plus uncles, aunts, and a host of nieces, nephews, cousins, church family, and her neighborhood friends.

The gates of Heaven opened and summoned up a very beautiful dear solider; Willie Mae (Puddin) Hicks-Dunlap. She went to be with her Savior on October 23, 2021. She was born May 2, 1929 in Sherrill, Arkansas to MB and Viola Hicks both who preceded her... View Obituary & Service Information

The family of Willie Mae Dunlap created this Life Tributes page to make it easy to share your memories.

The gates of Heaven opened and summoned up a very beautiful dear...

Send flowers to the Dunlap family.