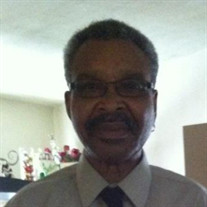 Willie Charleston, Jr. was born November 26, 1942 to parents Bessie and Williest Charleston in Beaulah, Mississippi both who preceded him in death, along with a brother; Tommy T. Brown and a son; Steven Charleston. He went to be with the Lord on Wednesday May 19, 2021 surrounded by his loving family after a long battle with cancer. Willie was raised in Chicago, Illinois where he attended Hyde Park High School. He was a good student and outstanding basketball player. Later Willie moved to Jackson, Michigan after the passing of his father with his mother at the age of 27 in 1969. He confessed Christ at Second Baptist Church under the late Reverend Polk Williams and later moved his membership to New Macedonia Church under Pastor Bennie J. Gibson until his death. He was employed by Conrail Railroad in 1970. Willie took a medical retirement in 1995 to take care of his granddaughter Tarae and later began babysitting his other grandchildren. Willie was a hardworking provider for his family all his life. Willie married Sandra Kay Taylor on October 24, 1970 in Jackson, Michigan. During their 50 years of marriage, they raised four children. Willie was always ready to entertain and never met a stranger. His wife called him Mr. Friendly. He was known in his neighborhood as Paw Paw. Willie liked watching sports, helping care for his grandchildren, washing his cars, taking care of the yard, and helping anyone he could. He leaves to cherish his loving memories his wife; Sandra Charleston, four children of Jackson, Michigan; Anthony Charleston, Angela Holt, Christina (Anthony) Stewart, Sr., and Willie Charleston, III. eight grandchildren; Passion Gibson, Domanique Dreams, Antonio Dreams, Jasmine Charleston, Anthony Stewart, Tarae Keathley, Willie Charleston and King Charleston, and thirteen great grandchildren, through good times and bad times, they were a strong loving family. He also leaves a special cousin; Evelyn Strickland, and special friends; Henry Hardrick, Jimmie Williams, Pastor Bennie J. Gibson and Sherrie Campbell. Willie was deeply loved by many nieces, nephews, cousins, other relatives and friends. He will be deeply missed

Willie Charleston, Jr. was born November 26, 1942 to parents Bessie and Williest Charleston in Beaulah, Mississippi both who preceded him in death, along with a brother; Tommy T. Brown and a son; Steven Charleston. He went to be with the Lord... View Obituary & Service Information

The family of Willie Charleston Jr. created this Life Tributes page to make it easy to share your memories.

Send flowers to the Charleston family.