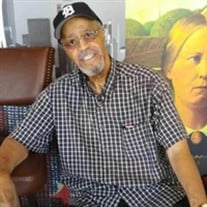 Wendell Lamar Ayers was born to the union of William and Daisy Ayers on June 29, 1940 in Rockmart, Georgia. He was the third of their four children. At 6’5” tall, Wendell was a football and basketball standout for Western High School where he was a member of the W club as well as an honor student. He loved playing baseball during summers as well. Wendell met Annie Johnson, the love of his life, at her parents’ home in Detroit, MI in 1959. A few months later in January of 1960 after hearing Annie preach at a revival, Wendell gave his heart to the Lord. Wendell and Annie were united in holy matrimony on September 11, 1965.  To this union, two beloved daughters were born: Kenya and DeLayne.  Wendell  later graduated from Wayne State University with a Bachelor’s degree in General Studies.  Wendell worked for General Motors Corporation for 35 years in Shipping and Handling, as Skilled Tradesman, as Foreman, as General Foreman and as Manufacturing Engineer. After retirement, Wendell worked for seven years for Detroit-based, non-profit, Focus Hope teaching in their workforce development programs. He was an avid photographer and owner of Photo Images by Ayers through which he captured happy moments in many people’s lives.  Wendell also enjoyed golf, bowling, & racquetball.  He and Annie enjoyed traveling globally together. Wendell was involved in his local community serving as an election worker for Augusta Township, MI. Through his church involvement, Wendell served in the following capacities: For Joseph Campau Avenue Church of God:  Usher, Choir Member (way off-key), Trustee, Chairman of the Trustee Board, and Watchman on the Wall* For Power Center Church International (PCCI):  Trustee, Leader of Men’s Ministry and Assisted with Basketball Program, Security and Watchman on the Wall* For Bethlehem Temple of Praise (BTOP): Member of the Finance Team and Watchman on the Wall* Wendell Ayers departed this life on December 26, 2019 in Arlington, TX from cardiac arrest. His parents and two siblings (G.B. and Louise) preceded him in death. Wendell loved to encourage and affirm people and was an adored surrogate father, uncle and mentor to many. He was known for his generosity, kindness and would willingly give of his wisdom, time, talents or treasure to help others. He will be greatly missed by those he leaves to cherish his memory including his wife of 54 years, Annie; their two daughters Kenya and DeLayne; one sister Helen Andrews; three sisters-in-law Priscela (Ralph), Cleastine, and Erie and two brothers-in-law Willie (Ida) and Lawrence (Marilyn) — (all of whom he loved as though they were related by birth); godchildren Shawnda Henry, Wendell McLaughlin, Bethany Branch and Kenan Cross; Several children adopted in his heart and a host of nieces , nephews, great-nieces, great-nephews and cousins. His beloved Sasha (the grandpuppy) will truly miss their early morning time together. *Watchmen on the wall are prayer warriors

Wendell Lamar Ayers was born to the union of William and Daisy Ayers on June 29, 1940 in Rockmart, Georgia. He was the third of their four children. At 6&#8217;5&#8221; tall, Wendell was a football and basketball standout for Western High School... View Obituary & Service Information

The family of Wendell Lamar Ayers created this Life Tributes page to make it easy to share your memories.

Wendell Lamar Ayers was born to the union of William and Daisy...

Send flowers to the Ayers family.