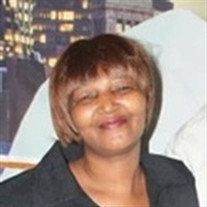 Wanda Denise Hall was born on July 5, 1957 in Detroit, Michigan to the late Edgar Hall of Highland Park, Michigan and the late Rachel Hall of Detroit, Michigan. She also has seven other siblings who preceded her in death: brothers; Richard, David. Gene, Timothy(Timmy), Dale(Bra), William(Poopy), sister; Valerie Hall-Love. Wanda known as “Niecy” grew in the Baptist Church. She attended the Detroit Public School System. She worked as Barmaid in different Establishments. She also did Caregiving work. Niecy loved her family and would do anything to protect them. She was a tough “cookie” in her days and didn’t bite her tongue. Said what she had to say to who she had to say it to. You didn’t mess with her and you didn’t mess with her family. If you did, it was going to be a fight. And if she lost, which was not often, you better be ready to fight again. Growing up she thought she was our momma, that was the love she had for her family. When Niecy got sick, the fight for her life, really got real. It got tough and tougher, until one day her body couldn’t fight anymore. God felt her pain and witnessed her suffering. He whispered softly to her. “Hey Niecy you can’t fight this battled alone, come with me, my child, for I have reserved you a place in the Kingdom’s Home.” Niecy leaves to cherish her memory, her sons; Isadore Hall (Mark)l and Robert Hall (Inky), her daughter-in law, Tiffany Hall; her grandchildren; Isadore Hall Jr., Dontrae, Erica, Lamar, Shaquise, Robin, Honor, Robert Hall Jr.; her great grandchildren; Khyron , Cydni, and Courtni; her siblings: sister, Gale and brother-in-law Chris, sister Patricia, Buffalo New York, sister Vanessa, sister Lynette Hall-Span, brother-in-law, James Span, brother, Darnell Hall, sister-in-law, Sherisha-Carter-Hall, brother, Melvin, brother-in-law, Henry Love and a host of nieces, nephews, cousins and friends.

Wanda Denise Hall was born on July 5, 1957 in Detroit, Michigan to the late Edgar Hall of Highland Park, Michigan and the late Rachel Hall of Detroit, Michigan. She also has seven other siblings who preceded her in death: brothers; Richard,... View Obituary & Service Information

The family of Wanda Denise Hall created this Life Tributes page to make it easy to share your memories.