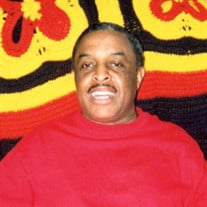 Wade Patterson Hooks, Sr. affectionately known as “Booman” was born on May 6, 1941 in Wetumpka, Alabama. He was the youngest of five children born to the union of Lera B. (Thrasher) and John Wesley Hooks, Sr. Wade spent his entire youth in the Deep South where he attended elementary school and Booker T. Washington High School. He was a gifted athlete-and excelled in all sports, especially baseball. He was drafted by the Birmingham Black Barons (Negro Southern League professional baseball team). After high school, he relocated to Detroit, Michigan. It was here that he found his higher calling, serving Jesus Christ by serving others, while in Michigan; he attended and graduated both from Barber school and The California School of Ministry where he obtained a Master of Theology degree. Wade was called to ministry while serving at Community C.O.G, under the leadership of Rev. Fred Davis. As an ordained minister Wade served with several churches in and around metropolitan Detroit to include Power Centre Church International (PCCI) where he served as associate pastor for 30+ years under the leadership of the late Apostle Rita J. Johnson. He officiated countless wedding ceremonies but was best known for his story telling. Wade married Delores J. [Hendricks] Hooks in 1966. To that union, three sons were born, Wade, Roderick and Mark Hooks. Wade’s eldest son, Derrik S. Moye of Hartford, Connecticut was born before that union. Wade was an avid story teller and had a passion for lawn care. He was often referred to as a lawn manicurist. He enjoyed spending time meticulously caring for his lawn and that of countless others. He departed this life on Saturday, February 20, 2021 at his home in Ypsilanti, Michigan surrounded by family. He was 79 years old. Wade was preceded in death by his parents; John Wesley and Lera Bea Hooks, his siblings; Alozene Williams, Hansel Hooks, Daisy Culliver, Lonzell Hooks and John W. Hooks, Jr. Wade is survived by his wife; Delores, children; Derrick Moye of Hartford, Connecticut, Wade P. Hooks, Jr., of Ypsilanti, Michigan, Roderick R. Hooks of Ownings Mills, Maryland and Mark A. Hooks of Belleville, Michigan, his sister; Wilma Jean Walton of Ypsilanti, Michigan, six grandchildren, three great grandchildren, a host of nieces, nephews and cousins, and a multitude of friends. His memory and the many stories he shared will be forever cherished by all who knew and loved him

Wade Patterson Hooks, Sr. affectionately known as &#8220;Booman&#8221; was born on May 6, 1941 in Wetumpka, Alabama. He was the youngest of five children born to the union of Lera B. (Thrasher) and John Wesley Hooks, Sr. Wade spent his entire... View Obituary & Service Information

The family of Wade Patterson Hooks Sr created this Life Tributes page to make it easy to share your memories.

Send flowers to the Hooks family.