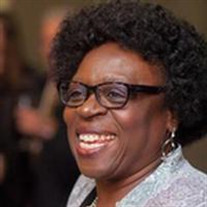 Beloved by all who knew her, Vranda Maria Barclay Goebel was reunited with her Heavenly Father on Saturday November 5, 2016 at the Henry Ford Hospice Home in Jackson. A lifelong follower of Jesus, Vranda's deep and abiding faith were a source of strength and comfort especially in her last days of life. Born in Chicago in July, 1951 to the union of Fitz-Hubert and Geraldine Barclay, Vranda was the seventh of their thirteen children. She was often referred to as the anchor and the mediator of this group; a role she was both loved and admired for. Vranda was beloved by her brothers and sisters and all of their children whom she generously supported in many ways over the years. Vranda was educated in Chicago Public Schools and later attended Eastern Illinois University, followed by the University of Iowa where she earned a Masters of Education. Vranda worked as a track and field coach at the University of Iowa and subsequently at Central Michigan University. She then became the Athletic Director for the Michigan State Prison in Jackson, MI. While working at the prison, she also coached track and field at Jackson High School. Vranda coached high school students for more than 30 years and even after she retired from teaching in 2010, she continued to coach high school track and field until the spring of 2016. Vranda enjoyed high school athletics and was well known to attend cross country, basketball, football and track events statewide alongside her husband, John. In 1999, Vranda was reacquainted with a friend she had met while attending Mount Pleasant Community Church. John Goebel, a widower, was Vranda's soulmate and after a brief courtship the two were married on August 5, 2000. John and his children, Andy and Krista, welcomed Vranda with love to the Goebel family. Together, they shared many precious memories including traveling, attending sporting events, and spending time with family; especially their grandchildren, Oskar and Milo. Vranda is survived by her loving husband, Patrick John Goebel; two children, Andrew Goebel (Amy) of Portland, Oregon and Krista Goebel of Kalamazoo, MI; two grandchildren, Oskar and Milo; and 12 siblings, Gina Barclay-McLaughlin (James) of Knoxville, Tennessee, Herma Barclay-Williams (Eric), of Silver Springs, Maryland, Celene Cole (Joseph) of Chicago, Illinois, Welton Barclay (Rolene) of Loves Park, Illinois, Samuel Barclay of Chicago, Illinois, Fitz Barclay Jr., of Chicago, Illinois, Ernest Barclay (Delores) of Ormond Beach, Florida, Dorothea Ridgeweay (John) of Waukegan, Illinois, Thomas Barclay (Yvette) of Chicago, Illinois, Lester Barclay (Sue) of Chicago, Illinois, Aaron Griffin, of Michigan and Lamont Barclay (Michelle) of Tampa, Florida; and a host of neieces, nephews, cousins and other relatives and friends. Generous with her time, Vranda enjoyed volunteering in the community. Her smile and gentle presence were a comfort to visitors at Hospice Home. Vranda and her husband served faithfully as board members at Together We Can Make a Difference ministry for ten years. She has been a Sunday school teacher and member of the hospitality team and welcoming committee at Westwinds Church where she and her husband have served and attended for more than 15 years. Her beautiful, loving spirit will be greatly missed by anyone who had the great pleasure of knowing her. A final tribute to Vranda's life will be held at Jackson High School Auditorium November, 26 2016 at 1 PM. In lieu of flowers, Vranda and family request that donations be made to: Together We Can Make a Difference 224 W. Wilkins Street Jackson, MI 49203

Beloved by all who knew her, Vranda Maria Barclay Goebel was reunited with her Heavenly Father on Saturday November 5, 2016 at the Henry Ford Hospice Home in Jackson. A lifelong follower of Jesus, Vranda's deep and abiding faith were a source... View Obituary & Service Information

The family of Vranda Maria Goebel created this Life Tributes page to make it easy to share your memories.

Beloved by all who knew her, Vranda Maria Barclay Goebel was...

Send flowers to the Goebel family.