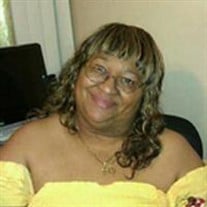 Vivian Lee Kirby, was born June 20, 1948, to Oscar and Mary Lee Abbott in Detroit, Michigan. Vivian affectionately known as “BeBe” was the third of five children. She grew up in the “Black Bottom” area on the eastside of Detroit, where she attended the Detroit Public Schools. She accepted Christ at an early age in Detroit, Michigan, and in recent years she has been a devoted Mother of Worship Church under the leadership of Pastor Ocie Tabb, III. Vivian had various passions, and ways to keep herself and others entertained. She loved music, dancing, enjoying a good movie, internet shopping, playing her online card and Facebook games, and cooking (and if you all had her food, you know she could have had her own restaurant), but more importantly she enjoyed sharing conversations and laughs with family and friends. Vivian had that natural ability to command a room and because of her personality, people would gravitate to her. People adored her, whether she was making you laugh, sharing life-lessons, or giving you a piece of her mind! There is an old saying that goes “It takes a village to raise a child”; however, it took a “BeBe” to raise a village. Vivian for most of her life either taught Head Start or provided childcare for family and friends. Most of the children she helped raise considered her their second mother, and she cared for and loved them as if they were her very own. Aside from her human babies, she had her animal babies, including thirteen birds, two dogs, and one cat that she also loved unconditionally. The Lord called Vivian Home November 18th, 2016 at Beaumont Hospital, where she was surrounded by loved ones. She was preceded in death by her husband; James Kirby, her parents; Oscar and Mary Lee, one sister; Mary Ann, and one brother; Oscar, Jr. She leaves to cherish her memories and her legacies; two sons; Willie (Nick) and his wife Doris, Eugene (Gene), and one daughter; Tiara, her “Apple Dumpling”; her Pride and Joys; her grandchildren; Essence (Pootie Poo) and Robert (Chunk), and two loving sisters; Shirley and Theretha. She also leaves her many godsons and goddaughters, along with a host of nephews, nieces, aunts, family and friends.

The family of Vivian Lee Kirby created this Life Tributes page to make it easy to share your memories.

Send flowers to the Kirby family.