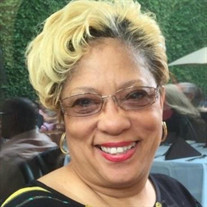 We celebrate the life and love of Virginia Faye Caloway Rawls (affectionately known as “Ginger”), who passed away peacefully on Wednesday, March 3, 2021. Her devoted and caring husband, James, along with her adoring sons, Jalen and Julian, were at her bedside at Henry Ford Hospital to pray and comfort her. Ginger was born in De Kalb, Mississippi on August 19, 1953, the oldest daughter of loving parents, Moseec and Hazel Caloway. After graduating from Mumford High School in Detroit, she furthered her education at the University of Detroit, where she studied medical lab technology. Ginger first met the love of her life, James Allen Rawls, in the early ‘70s. They were joined in holy matrimony on February 15, 1992, and ever after became a loving and spiritually connected family. Devoted to each other for almost three decades, Ginger and James commemorated their 29th wedding anniversary on February 15th. At an early age, Ginger professed her faith in Jesus Christ as her Lord and Savior. She and James were faithful members of the Citadel of Faith Covenant Church in Detroit. God blessed Ginger and James with two talented sons, Jalen and Julian. Ginger was overjoyed with pride as Jalen graduated from Tennessee State University in Nashville, Tennessee, and Julian from Wayne State University in Detroit, Michigan. It is absolutely no secret that Ginger cherished her grandma time with dear grandson, Aiden Alexander, who affectionately called her "Gigi" and shared her spirited Leo personality. She enjoyed gardening and cooking southern recipes passed down the family tree. Ginger's family meant the world to her, and she was the ultimate wife, mom, daughter, sister and grandmother. She joined in all birthdays, family reunions and Thanksgiving celebrations, and she brought to every gathering her own special spice and energy. She especially loved spending time and shopping/thrifting with her mother, Hazel. Ginger so enjoyed hanging out with her parents, and was always there for them, providing ardent support whenever needed. Her father recollects that, "He always wanted sons and was extremely proud of the grand boys his daughter blessed him with." Ginger retired as a United States Postal Service Supervisor after 28 years of dedicated service. She was also very creative in her entrepreneurial drive, earning her cosmetology license in the early ’90s, which led her to operate a successful manicure salon on Outer Drive and Livernois for several years. Ginger also supported the family business, Hot Tracks Catering. A joyful, steadfast and determined spirit, Ginger thrived on giving of herself to both family and friends. She cherished her friends, and sustained many longtime friendships over the years. You could always count on and trust Ginger, being there time and time again, bringing food, offering comfort, and providing support to all. Over the years, she enjoyed traveling with friends and family to destinations such as Italy, Barbados, Jamaica and Barcelona, Spain. She worked on political campaigns, and never shied away from offering advice. Preceded in death by her mother, Hazel Caloway, and brother-in law, Steve Paritee (Sharon), she leaves to celebrate her life and memory her father, Moseec Caloway; husband, James Rawls; sons, Jalen and Julian Rawls; grandson, Aiden Rawls; sister, Sharon Paritee; nephew, Christian Paritee; great niece, Alana Paritee; sisters-in-law, Brenda Rawls Babbs, Eva Rawls Shaw (Melvin), Carol Johnson Dean (Willie), Phyllis Rawls Goff, Nancy Rawls Gardner, Margaret Rawls Brown (Sydney); and brother-in-law William Leigh Rawls. Additionally, she leaves a host of nieces, nephews and many cousins and friends who loved her dearly and who will always carry her memory in their hearts. Ginger had a way of engaging everyone around her, creating a joyful spirit of love. We know that she has joined her mother, Hazel, and they are at peace in the hands of God. We love you, Ginger.

We celebrate the life and love of Virginia Faye Caloway Rawls (affectionately known as &#8220;Ginger&#8221;), who passed away peacefully on Wednesday, March 3, 2021. Her devoted and caring husband, James, along with her adoring sons, Jalen and... View Obituary & Service Information

The family of Virginia Faye Rawls created this Life Tributes page to make it easy to share your memories.

We celebrate the life and love of Virginia Faye Caloway Rawls...

Send flowers to the Rawls family.