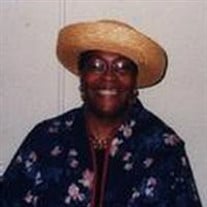 Mother Velta Lee Charles-Tupper-Street, was born March 23, 1938 in Shreveport, Louisiana, to the late Elder Johnny and Mother Ethel Lee Tillman-Brown-Charles, she was the oldest of Elder Charles children. She went home to be with the Lord on February 13, 2016. She was preceded in death by her two sons; Taveen Tupper and Curwin Street. She attended Central Elementary in Dublin Louisiana, when the family moved to Detroit, Michigan she graduated from Northern High school. Mother Street then attended D.B.I, and worked in the sales department, she also worked for the Detroit Mutual Life Insurance Company. Mother Street was saved at the age of thirteen years old under the late Elder One Arm Gordon of St. Aubin Street C.O.G.I.C., the family also worshipped at Riopelle Street C.O.G.I.C., where Uncle Johnny Charles pastored. Elder Johnny Charles worshipped under Bishop Elton Lawrence, pastor of Holbrook C.O.G.I.C. and at the age of 15 Mother Street suggested she could be under Bishop H.J. Williams, so armed with a letter of recommendation off she went and she stayed, prayed and worshipped God. She was obedient and she read the word of God and taught the word of God. She trained in church work under Bishop and Mother Williams. Mother Street married Bro. Albert B. Tupper and to this union five boys and one girl were born. When Bro. Tupper passed she wedded Pastor I.T. Street from the Church of God, who pastored the Pasadena C.O.G. in Flint, Michigan, who had three sons he brought to the marriage union. The Lord planted them under the heading of Mt. Olive C.O.G.I.C., leaving the North Central Jurisdiction under Bishop H.J. Williams. They moved from under Bishop C.L. Anderson’s Jurisdiction. Pastor Street had begun a new mission, as he was soon to retire from Chrysler Corporation; and under Pastor. I.T. Street many souls were saved. After 20 years, Northwest Church of God became Mother Street and Pastor Street’s home church under the late Elder and Mother Randall. Mother Street served as the President of the Missionary & Foreign Mission Dept., a Sunday teacher H.Y.P.U. teacher and curriculum planner, Assistant Church Mother, supporter of tithes and offering. Mother Street believed that every boy and girl should be taught why Christians celebrate the following: Sunday School, The plan of Salvation, Romans 9-10, John 3-7, The Communion, I Corinthians 11: 23-30, 1st John 1-3, St John 15: 1-17, feet washing, St. John 13: 2-15 humility and thanksgiving; Psalms 104: 11-33, Psalms 106, Psalms 107: 1-31, forgiveness; Matthew 6: 14-15, Ephesians 1: 7 and 4:32, The Lord’s Prayer, 6:9-13, Christmas; Luke 1: 26-38, Matthew 1:18-25, Easter; John 20:1-31, Jesus’ work on the cross his “death, burial and resurrection. Psalms: 23, Lord and Savior, Sovereignty of God Glorified Body and Life after death, I Corinthians 15: 42-50. Her favorite color was red which means the Blood of Jesus, her favorite hymn was, “At the Cross”, her favorite bible lessons were; Christmas and Easter; Daniel in the Lion’s Den and Joseph’s coat of many colors. The work of the church is saving souls. Church work is Auxiliaries letting the world see in a practical way how divine the spirit of God works in love and togetherness in human form, which produce souls for the body of Christ. After stepping down from her position, the Lord gave her a new mission, the mission of encouragement which entails: exaltation of the name of the Lord, giving, forgiving and presence. All of this is done by writing letters to the saints, sinners and backsliders by the grace of God. Mother Street is survived by her four boys and one girl, Albert (Paula) Tupper, Jr., Gerard Tupper, Isaac Street, Jr., Alfred (Debra) Street, and they all attend Northwest Church of God under Pasturage of Elder Clayton Keene, my only daughter; Sis. Tresna Tupper who is a Sunday school teacher at Northwest C.O.G., and is also the founder of “Chains or Change” Youth Preventive Program, Elder Liddell (Missionary April) Tupper and members of the Out Reach Ministry; Bishop Gilbert, Pastor Deidric (Missionary Natasha) Tupper who is the Pastor of New Faith Fellowship C.O.G.I.C. Mother Street also had a host of brothers and sisters; Johnny Charles, Alvin Charles, Jerome Charles and Larry Charles, her sisters; Alvoughn Charles (deceased) Verlinda Charles-Huey, Evon Charles, Angiereen Charles, Sylvia Charles and Pat Charles, Curwin’s wife Helen Street and a host of brother-in-law’s and sister-in-law’s, her first grandchild and great-grandchild Michael A. Darnell, Jr., and his son the III. After that, a host of grandchildren and great grandchildren were fortunate to be in her lineage. Mother Street adopted many others she called her children and Godchildren in Christ. Mother Street wants to know will you meet her in Glory.

Mother Velta Lee Charles-Tupper-Street, was born March 23, 1938 in Shreveport, Louisiana, to the late Elder Johnny and Mother Ethel Lee Tillman-Brown-Charles, she was the oldest of Elder Charles children. She went home to be with the Lord on... View Obituary & Service Information

The family of Velta Lee Street created this Life Tributes page to make it easy to share your memories.

Send flowers to the Street family.