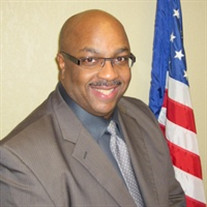 Tony M. Lewis, 54 of Jackson Michigan, passed away Thursday, December 21, 2017 at University of Michigan Hospital. Tony was born August 24th, 1963 in Forest, Mississippi to Jessie Lee and Alice Jean Lewis. The Lewis Family relocated to Michigan where Tony attended Jackson Public Schools and graduated from Parkside High School. While there he was a member of the Parkside marching band and drumline and the Jackson Youth Symphony Orchestra. Tony was a member of Second Missionary Baptist Church since childhood under the leadership of the late Pastor Amos Polk Williams, who baptized him at the age of six. He was employed at the State of Michigan as a Family Independence Specialist and as P2P at Frost elementary school. Tony was a lover of all people and had a strong passion for helping. As a result of this, Tony became very active in many areas. He was President of LifeWays mental health board for two years and later became the LifeWays board President of Suicide Prevention, where he served until the time of his passing. He was also currently serving as a member of the Children Committee of Mental Health Association, on the United Way board, as well Chair of the Regional Rights Advisory Council and Vice Chair of the Recipient Rights Committee. He was also the Vice Chair of Second Missionary Baptist Church’s Creative Team, the President of the Security Ministry, a prospective board member of Second Missionary Baptist Church under the leadership of Pastor Darius Williams. Tony was also a talented musician; he played several instruments and loved music of all kind. In his free time Tony would teach himself how to play different instruments and restore drumsets. His passion allowed him to meet many renowned musicians throughout the United States. He leaves to cherish his memory his loving mother; Alice Lewis, who he was devoted to, one daughter; Janelle Lewis, one granddaughter; Nayah Skinner, his loving fiancé; Lillie Borden, three uncles; Dennis Lewis (Jackie) of Union City, Tennessee, Robert Lewis of Chicago, Illinois, and Albert Lewis (Bonnie) of Jackson, Michigan, an aunt; Sadie Ransfer of Los Angeles, California, a special friend; Don Bennett of Seattle Washington, childhood friends; Debra Ragland, and Randy and Don Browner, special friend; Terry Thomas, special mentors; Edward Wood, and Jim Shotwell, Sr., as well as many other cousins and friends.

The family of Tony Mitchell Lewis created this Life Tributes page to make it easy to share your memories.

Send flowers to the Lewis family.