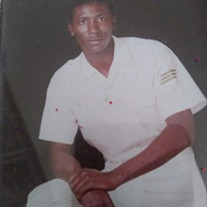 Thomas, Jr. was born on April 30, 1954 to the union of Thomas and Dorothy Mason in Flint, Michigan. Mason was called home to be with the Lord on April 16, 2019 at the home of his baby sister, and sur­rounded by love ones. He was preceded in death by his Father, Mother, Grandmother Dorothy, Sister Deborah, Brother Timo­thy, Uncle Gregory, and special nephew Nicholas. He was baptized at an early age, and gave his life to the Lord. In his younger years Thomas sang in the choir with his siblings, and they were known as the Five Star Steps, later becoming a member of the Elmwood Park Church of Christ under the leadership of Bro. Reginald Best. Thomas served as an usher, passing the communion, and was always available to do the work of the Lord. Whenever there was sor­row, pain or joy he would take you to the word of God, and whatever your situation he recommended Christ as the answer. Thomas received his education in the Jackson County Public School System where he was an avid swim­mer, wrestler, and baseball player, Thomas was affectionately known as "lover boy" at a young age by his great Aunt Laurlie. He joined the United States Navy where he was stationed in Japan, and served his country proudly. He was very skilled and worked hard on every job he took on. Thomas held many positions such as a Horse Handler, and Master Builder. When something needed to be fixed he would read about it, and get the job done. Whatever needed to be fixed he would give you a look and say "Oh you want to give your money away, if you can read about it, be about it, then you can get the job done". He was a City and County worker, and drove 18 wheeler trucks, and he also assisted his baby sister in her business ventures helping whenever he could, Thomas was also proud to be a Ballot Box Handler. He loved fishing, playing golf, and he knew all the rules. When he was not working he enjoyed riding his bike. Thomas would out dance you all night, and was a Top Chef and loved to BBQ. He was a great sto­ryteller, and loved reading books. He also rode horses in the Memorial Day, and Thanksgiving Day pa­rades. Thomas was instrumental in saving a lady from being assaulted, and received an Outstanding Service Award from the City of Jackson, Michigan in 1984. He moved to Louisiana in 2005 to volunteer his ser­vice to the survivors of Hurricane Katrina. Thomas will be greatly missed! He leaves to cherish his memory two daughters; Carol, and Tadottie (husband Rayshaun), two sisters; Vic­toria (husband Michael) Rhonda (Husband Flantz), five grandchild; Brandon, JaJuan, King, Ray, and Shan, three great grandchildren; and host of nieces, nephews, cousins, friends, a very special friend Clady, and his Elmwood Park church family.

Thomas, Jr. was born on April 30, 1954 to the union of Thomas and Dorothy Mason in Flint, Michigan. Mason was called home to be with the Lord on April 16, 2019 at the home of his baby sister, and sur­rounded by love ones. He was preceded in... View Obituary & Service Information

The family of Thomas Mason, Jr. created this Life Tributes page to make it easy to share your memories.

Send flowers to the Mason, family.