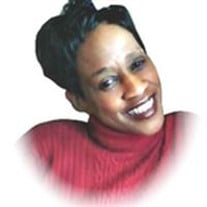 What a blessed day when Theresa Burton was born to the late John and Willie Ruth Burton, on September 6, 1957 in River Rouge, Michigan. She was affectionately called,“Rita Babe” or “Reesa.” She accepted Jesus Christ at an early age at Palmerston Street Church of God in River Rouge. She was the eighth child born of nine children. Theresa attended River Rouge High School, where she was on the National Honors society. She had a strong passion for music and was a dedicated member in the high school band playing the flute and the clarinet. During this time she was listed on, “Who’s Who Among Music Students in American High Schools”. After graduating in 1975, she attended the University of Michigan and then later, Eastern Michigan University. Theresa worked for the River Rouge transportation system and Gordon Food Service (GFS). In 1980, she met the love of her life, Walter, and they have virtually been lifelong companions. It was love at first sight. Their journey of life began for the two of them after conceiving Lionel Sanders (deceased) and Brittany Sanders. She looked forward to supporting and accompanying her husband during his marathons and his races and was not averse to giving advice on training and proper nutrition. She treasured the bonding time with her family. She enjoyed movie nights, singing, dancing, traveling, and spending quality time with her girls; daughter Brittany and granddaughter Kenzie, who she called, “Mee-ma’s girl.” She was a good jokester, loved to laugh, loved cooking, listening to music, and being at home. Her favorite family phrase was, “WE ARE ONE!” She was a loving and devoted sister, aunt, mother, grandmother, and wife. She brought a sense of joy to everyone she encountered. She embraced life to the fullest and always encouraged others to do the same. She was preceded in death by her parents; John and Willie Ruth Burton, her son; Lionel Sanders, and siblings; Joe, Ruby, Beatrice, Peter, Ira, and Desiree. Theresa departed this life on June 2, 2016 and leaves to honor in her memory, her husband; Walter Sanders, a loving daughter; Brittany L. Sanders, her granddaughter; Kenzie Houston, her sisters; Emmaline (John), Minnie, and Johnnie Mae (Jimmy), her sisters-in-law; Helen, Diane, Annette, Linda, Lisa, and Marion, and her brothers-in-law; Derrick, Steve and Marlon. Theresa has impacted the lives of a host of nieces, nephews, cousins, aunts, uncles, in-laws, spiritual sons and daughters, and many close friends that remain to celebrate her life and legacy.

What a blessed day when Theresa Burton was born to the late John and Willie Ruth Burton, on September 6, 1957 in River Rouge, Michigan. She was affectionately called,&#8220;Rita Babe&#8221; or &#8220;Reesa.&#8221; She accepted Jesus Christ at... View Obituary & Service Information

The family of Theresa Burton-Sanders created this Life Tributes page to make it easy to share your memories.

What a blessed day when Theresa Burton was born to the late John...

Send flowers to the Burton-Sanders family.