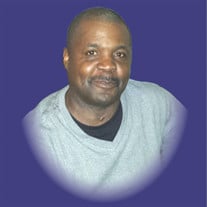 Terry was born December 28,1964 in Autaugaville, Alabama to Charney ‘Doc” Nelson and Ola Nelson. Terry was the third child born to this union. Terry moved to Detroit, Michigan in July 1969 with his parents and then 4 siblings. He enjoyed spending quality time with his family. He also looked forward to weekend sleep overs and backyard barbecues with his aunts, uncles and cousins. He attended Detroit Public Schools until high school. He obtained his G.E.D. and vocational training through the Job Corps where he obtained certificates in welding and plumbing. After graduating from high school, he relocated to Charleston, South Carolina. There he worked in several job fields; including construction, automotive sales, service, and plumbing. In 2010 he moved to Silver Spring, Maryland. During his time in Maryland he worked in the construction, grocery, restaurant, and lawn care fields. While in Maryland, Terry met and fell in love with Lolita Boldings in 2014. She and her daughter Ashari Johnson were considered family to him. He and Lolita loved relaxing at home watching tv, going for walks, and just spending quality time together. He worked very hard providing for his family. As Lolita fondly says, “Terry was a God fearing man that loved his family, mother and siblings,” Terry’s journey ended on Monday, June 8, 2020 and he will be reunited with his father; Charney “Doc” Nelson and brother; Sylvester Nelson. Left to mourn his passing is his loving and devoted mother; Ola Nelson, three sons; Terry Nelson Jr., Terrell Nelson, Tervonte Nelson, two grandkids; Antwan Webster, and Tristan Nelson, three sisters; Ella Nelson of Detroit, Michigan, Michelle Nelson of Silver Spring, Maryland and Yolanda Nelson of Southfield, Michigan, one brother; Clyde Nelson of Harper Woods, Michigan, his extended family; Lolita Boldings, and Ashari Johnson, and a host of aunts, uncles, nieces, nephews, cousins and friends.

Terry was born December 28,1964 in Autaugaville, Alabama to Charney &#8216;Doc&#8221; Nelson and Ola Nelson. Terry was the third child born to this union. Terry moved to Detroit, Michigan in July 1969 with his parents and then 4 siblings. He... View Obituary & Service Information

The family of Terry O'Keith Nelson created this Life Tributes page to make it easy to share your memories.

Terry was born December 28,1964 in Autaugaville, Alabama to Charney...

Send flowers to the Nelson family.