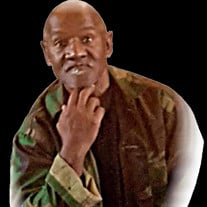 Terry Lee McCray was born November 12, 1959 in Detroit, Michigan. He unfortunately became a ward of the Foster Care System and moved from home to home, however, when a sweet saint named Sis. Edwards took him in, Little Terry became part of a loving family which included a sister Virginia and a brother called Big Terry. He resided with them until he became of age and took care of himself. This was also when Terry became part of Joseph Campau Avenue Church of God. Terry accepted Christ as his personal savior at an early age and was active in many areas: Youth Choir, Adult Choir, Usher Board, Singles Ministry, Potter’s Hand Sign Language Ministry, and Sound System Team. He was a loyal and faithful member and will be truly missed. Under the Pastorship of Dr. Otis F. Brown, Terry felt called to the ministry and even gave an Inaugural Sermon. Terry continued his faithful membership at Joseph Campau Avenue Church of God under the leadership of Pastor David Lunn until his untimely death. Educated in the Detroit Public School System, Terry graduated from Pershing High School Class of 1977. He believed a man should have a job, and he kept one; and even though he didn’t drive, he made it to work on time. Terry’s longest employment was at Uncle Ray’s Potato Chip Factory and he had the whole church lovin’ some Uncle Ray’s. His last job was with the Powder Cote Corp. (2017-2020). Terry also enjoyed helping out with the Gholston Family catering business. He was fun loving and outgoing and a friendly face to the children around the church. Terry was called to eternal rest on Tuesday, July 14, 2020 at Providence Hospital. He leaves to cherish his memory; Josephine Gholston, Godmother (Conyers, Georgia); Derwin Gholston, God brother, (Angela), Shannon Gholston, God sister (Las Vegas, Nevada), Joseph Campau Ave. church family; Thomas McDaniel and James Shannon, good friends, and several godchildren and a host of other friends and coworkers.

Terry Lee McCray was born November 12, 1959 in Detroit, Michigan. He unfortunately became a ward of the Foster Care System and moved from home to home, however, when a sweet saint named Sis. Edwards took him in, Little Terry became part of a... View Obituary & Service Information

The family of Terry Lee McCray created this Life Tributes page to make it easy to share your memories.

Send flowers to the McCray family.