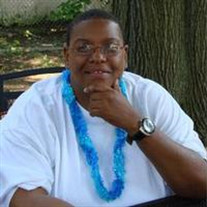 Terri Dion Andrews was born on December 5, 1962 in Highland Park, Michigan to Terrell Joseph and Hattie Louise Andrews, who both preceded her in death. Terri was educated in the Highland Park School System and later continued her education to receive her Bachelor’s Degree from Northwood University in Business Administration in Technology Management, and also her Masters of Business Management. Terri married late in life to Dorien Marie Gosa. Terri was known for being nice, bright, cheerful, patient, always helpful and gracious considerate of all she came into contact with. She had a laugh and a smile that could bring joy to any room! For the past 25 years, Terri worked diligently to establish herself as a valued and important team member. She was an officer for the Rainbow Network with Raymond James of Southfield for years. Her goal was to find ways to make the work environment pleasant for all, and her commitment to her work was unparalleled. She was employed with Honigman, Miller, Schwartz, and Cohn law firm, where she took great pride in working the IT Helpdesk. Terri had many interests; she played the flute, drums and piano in high school and college, as well as at The Lighthouse, her church home of many years. She loved acting and was in many productions, a short film, and a special production of “Burying The Bones” at the Detroit Reparatory Theater. Terri has written a screen play and a reality show. She recently decided that she wanted to be able to marry couples, so in 2014 she received the credentials to do just that! Terri made her transition on Friday, May 26, 2017 while sleeping at her home in Highland Park, Michigan, that she loved so very much. In addition to her parents, Terri was also preceded in death by her grandparents; Thomas, Sr. and Patsy Hill. She leaves to rejoice and celebrate her life her spouse; Dorien Gosa, one sister; Denise, two stepdaughters; Keyana and Camille, three grandchildren; William, Isaiah, and Leah, her God-son; Ryan, and her last surviving aunt; Aunt Elma Lee Clark. She also leaves a host of other relatives, friends, and loved ones.

Terri Dion Andrews was born on December 5, 1962 in Highland Park, Michigan to Terrell Joseph and Hattie Louise Andrews, who both preceded her in death. Terri was educated in the Highland Park School System and later continued her education... View Obituary & Service Information

The family of Terri Dion Andrews created this Life Tributes page to make it easy to share your memories.

Send flowers to the Andrews family.