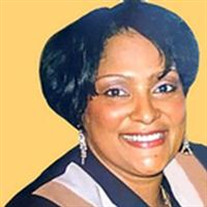 Tamara Paula Montgomery was born in Detroit, Michigan on February 18, 1965. She was the sixth of seven children born to her loving parents Charlotte and Thomas Crawford. One sister, India, preceded her in death. Tamara, better known as Tammy, was educated in the Catholic School System graduating from Dominican High School in 1983. She later attended Western Kentucky University in Bowling Green, Kentucky. Tammy was brought up in the Catholic faith, but after marrying the love of her life. Lemuel Montgomery, she accepted Christ and became a member of the Eastside Church of God where she was a faithful choir member for many years. Tammy and Lem grew up in the same neighborhood as childhood friends. During their college years, they rediscovered each other one year during summer vacation. Upon her return to college Tammy and Lem continued a long distance relationship which blossomed into “Little Lem”. They married and had three other children; Jasmyne, Jordon and Christian who only lived a few weeks. When Jordon was three years old, Tammy’s love for children led them to begin raising her three year old nephew, Kannon Tiller. Tammy’s favorite past times were shopping, cooking and watching movies with her family. She had a genuine love for people and seeing her without a smile was a rare thing. Her love for humanity led her to a career in serving people. At an early age she worked at “American Friends” a non-profit corporation catering to the needs of senior citizens. She was later employed at “Operation Help” helping the homeless and people on probation or parole. She ended her career working for the Detroit Public Schools System where she worked until she became ill. Tamara departed this life on Thursday, November 10, 2016 surrounded by her husband, children, sister and brother and several other close relatives. She leaves to cherish her precious memory, her loving husband of twenty-seven years, Lemuel Montgomery, Sr.; two sons, Lemuel, Jr. and Jordon Montgomery; one daughter, Jasmyne Montgomery (Ronald Robinson); one special son, Kannon Tiller and one precious three·week old grandbaby, Johan Christian Robinson Montgomery; three sisters, Renee (Alphonso) Fudge, Saber (Steve) Towers,and Catherine Tiller (Archie McQueen); two brothers, William (Nelda) Tiller and Sean Tiller; her father-in-law, Johnny (Joyce) Montgomery; one sister-n-law, Aleecia Montgomery; two brothers-in-law, Johnny (Shelly) Montgomery, Reginald Montgomery (Tameka); one special sister-cousin, Judy Gilbert; one special friend, Patricia Thurman and a host of other aunts, uncles, nieces, nephews, cousins and friends.

Tamara Paula Montgomery was born in Detroit, Michigan on February 18, 1965. She was the sixth of seven children born to her loving parents Charlotte and Thomas Crawford. One sister, India, preceded her in death. Tamara, better known as Tammy,... View Obituary & Service Information

The family of Tamara Paula Montgomery created this Life Tributes page to make it easy to share your memories.

Tamara Paula Montgomery was born in Detroit, Michigan on February...

Send flowers to the Montgomery family.