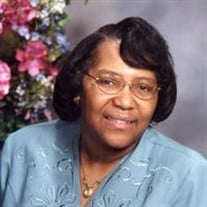 Stella Ruth Whittler was born to the union of Jimmie Lee and Iner Ruth Whittler on July 22, 1943 in Detroit, MI.  She was the youngest of three children and was cherished as the “baby” and only girl.  At a young age she began her walk with Christ, being saved and raised in the faith at Bailey Temple Church of God in Christ under the pastorate of Bishop John Seth Bailey, who would later become her step-father when he married her widowed mother in 1982.  Stella served in many roles at Bailey Temple Church of God in Christ including Young Peoples Willing Worker (YPWW), Choir and Usher Board, the latter of which would later make her visible to one James Calloway, A Church of God member who would visit Bailey Temple after Sunday services for dinner. Stella was educated in the Detroit Public Schools system through high school (Chadsey) though she graduated from Highland Park High School in 1961, creating bonds that remain to this day, having served as a planner for the “60ish” Reunion in 2011.  Stella enjoyed staying connected with her schoolmates through calls, visits, and one of her favorite pastimes, Facebook.  Stella was passionate about education, for herself and others, and chose Wayne State University to earn a BA of Education degree. She went on to a long, rewarding and impactful career as a school teacher, first as a student teacher at Northwestern High School, and then as a Business Education teacher at Coffee Middle School for 27 years.  As a testament to her stability (and just a cool fun fact), Stella taught in the same Coffey Middle School classroom (Rm 205) from 1968 – when her daughter Joy was nine months old – until Joy’s husband, Michael, took over her classroom in 1995. In 1964, as Stella served dutifully as an usher at Bailey Temp[le, she caught the eye of a young, handsome Church of God member named James Calloway who came to bailey Temple seeking a good Sunday dinner and a Godly wife.  HE found both at Bailey Temple, and after a serious first date – “tell me what you are looking for in a husband” – and a brief courtship, the two were joined as one in holy matrimony on July 10, 1965.  Stella joined James at Metropolitan Church of God where her true passion for ministry was ignited. She and her husband served faithfully under three pastors at Metropolitan - Rev. Dr. Samuel G. Hines, Rev. Dr. James Earl Massey, and Rev. Dr. Robert O. Dulin, Jr.  – as a member of the Deacon Board, and her most cherished ministry, Marriage and Family Life education/counseling. She and her husband became involved in the Marriage Enrichment Ministry in 1974 and continued that passion for couples and families for over 40 years.  Rev. James and Stella Calloway have been certified Marriage Enrichment leaders since 1975, and leaders of AGAPE United Families for Christ for nearly 35 years. With God at the helm of their marriage, James and Stella created a family with the births of Joy Dalineta (1968) and James Lorenzo (1971). Her children were her light, and that light magnified with the births of her grandchildren A’Lonzo (1990), James Jr. (1996) and Vashti (1997). Passion for teaching, including in the non-profit world, where she and her daughter Joy co-taught Parent University for the Detroit Community Justice Partnership for over five years.   Stella is a founder of M.O.I.S.T., a support group for mothers who have, or have had, incarcerated children.  This is a non-judgmental group formed to encourage mothers in their times of distress.  Creativity and encouragement were Stella’s strong characteristics.  She also loved to challenge people to develop a closer walk with the Lord through personal and daily times of devotion and fellowship.  Stella’s personal logo is Somebody Really Cares! She sought to share the love of God and His care for us with all those God brings into her life, beginning with her own husband of 54 years and her children and grandchildren.   Stella loves to spend daily time in personal fellowship with her Lord and Savior, Jesus Christ. Stella made everything, and everybody she touched, better.  Known for being a sweet, considerate, God-loving woman, she served as prayer partner for many and encourager for many more.  Her calming voice, offering positive affirmations and uplifting guidance were relied on by people across the country and around the globe. Stella was a lover of life and enjoyed travelling with her family (47 of 50 states, Bermuda, Jamaica, Mexico and Japan), reading (Debbie Macomber, anyone?), brain games, word puzzles, and of course her beloved board game – SCRABBLE. Over the years, Stella started and coached numerous Scrabble clubs in schools, community centers, and most recently her new home, the Park House senior living community. Since April, 2017, Stella was a bright light throughout the halls of Henry Ford Health System, from the gynecological oncology department to the chemotherapy infusion room and beyond; staff and patients alike looked forward to the days Stella was scheduled to be present.  Even in her final days of earthly life, Stella held on to and shared her unwavering faith, positive attitude and silly sense of humor. Stella leaves to celebrate her life and cherish her memory Her precious husband of 54 years James Calloway; her daughter Joy Dalineta - her true JOY; her SONshine, James Lorenzo; three grandchildren, A’Lonzo A’Lonte Howell and his family; James Lorenzo Calloway, Jr. and his family; and Vashti Nailah Lindsey - her BODTS: Beautiful One Destined To Succeed; her brother, William “Fred” Whittler; many nephews and nieces, a multitude of loving friends and her special sister Earline Small (husband Isadore).  Stella wishes to lead all her loved ones in saying:  TO GOD BE THE GLORY!

Stella Ruth Whittler was born to the union of Jimmie Lee and Iner Ruth Whittler on July 22, 1943 in Detroit, MI.  She was the youngest of three children and was cherished as the &#8220;baby&#8221; and only girl.  At a young age she began her... View Obituary & Service Information

The family of Stella Ruth Calloway created this Life Tributes page to make it easy to share your memories.

Stella Ruth Whittler was born to the union of Jimmie Lee and...

Send flowers to the Calloway family.