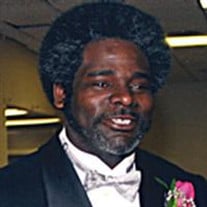 Stefon (Burkey) Naylor was born on May 30 1960 in Winston Salem North Carolina to the union of Leroy Stephens and Nellie F. Naylor. He was a very curious and strong willed child to say the least. The Naylor family relocated to Detroit when Burkey was 9 years of age. With his step dad Napoleon Adams who Burkey had a great deal of respect for. Stefon was completely devoted to his mother. When he was approximately 3 years of age when his mother entered the hospital for a 16 month stay. Upon her return he vowed to never leave her side. Stefon loved his mother dearly and you could often find him sitting on her porch on Appoline Street. Oh, how he loved her fried chicken and pinto beans! In 1978, at the age of 18 he met Lynda, the love of his life. To this union was born their beautiful daughter, Chanelle. He was extremely proud of being a dad and loved showing off his new baby girl! In 1988 Lynda and Stefon were married. He was truly in love with her and extremely committed to his wife and daughter. He was a strong and awesome protector and he made it clear to all that he loved his family more than life itself. They spent almost 40 years enjoying hobbies such as interior decorating (which he mastered) traveling, fishing, basketball and many others. Stefon loved his music and he loved it loud, he enjoyed fixing up cars, repairing computers, laughing & cracking jokes with his big brother Willie. He liked watching & playing basketball and if you were to challenge him you better bring you’re A-game. Stefon was educated in the Detroit Public School system. Although he adapted to Detroit he always made it clear that North Carolina was a place he loved so much and was proud to call it home. In 1979 he proudly enlisted in the United States Army where he quickly excelled and won numerous awards such as: Certificate of Superior Performance, marksmanship honors and was promoted to Sergeant Status in 1988 as well as numerous other awards. Stefon was employed at various companies such as Lason Systems, Artistic Upholsterers, Star Commonwealth (Detroit), Loomis Armor Guard and most recently Chrysler (JNAP). In 1990, Stefon accepted Christ when he was a member of The Church of God of Detroit. He loved the Lord and served the Lord at State Fair Church of God. HE LOVED CLEANING THAT CHURCH! On April 13, 2016 he answered his final call of duty and went home to be his Lord and Savior. He leaves to cherish his memory his, devoted mother; Nellie F. Naylor, his loving and committed wife; Lynda, daughter; Chanelle Hardnett, grandsons; Sherrod Stefon Smith and Thil Flinoil IV, and his favorite granddaughter; Sheylese Smith, brother; Willie Naylor, and sister; Valerie Miller. And a host of nieces, newphews, step brothers and sisters in Charolette, North Carolina and a very special friend Julius. He was preceded in death by his father, Leroy Stephens and sisters Linda and Felicia Na.

Stefon (Burkey) Naylor was born on May 30 1960 in Winston Salem North Carolina to the union of Leroy Stephens and Nellie F. Naylor. He was a very curious and strong willed child to say the least. The Naylor family relocated to Detroit when Burkey... View Obituary & Service Information

The family of Stefon Lee Naylor created this Life Tributes page to make it easy to share your memories.

Send flowers to the Naylor family.