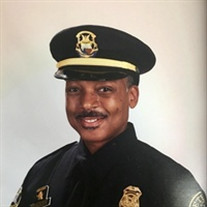 Shawn Kimble Wesley was born on October 5, 1966 to Thomas and Lorraine Wesley in Detroit, Michigan.  Shawn, along with his two sisters, Sonya and Senita were raised in a loving home where their parents provided a rich foundation of support that encouraged them to pursue their talents and dreams.  As the eldest child, Shawn quickly assumed his role of assisting his father with the care of the family and building his character to one that could be trusted by others. He was a serious student, fondly remembered wearing his glasses and reading novels well past his actual age, and was often kidded as looking like a young Don Cornelius.  After graduating from MacKenzie High School, he enrolled in Morehouse College, went on to the University of Michigan and ultimately returned home to commit to a profession where he could provide support and protection to his family, friends and the community.  He enrolled in the Detroit Police Academy in October, 1986 and graduated as a Police Officer on February 25, 1987.     Shawn was wise beyond his years and knew that his life would only be complete with the right partner at his side.   When he met Mary K. Rice (Kathie), she was not aware of his almost immediate decision that she would become his wife.  Shawn earnestly and relentlessly courted Kathie until she made her commitment to this man with such a wonderful heart.    On August 10, 1990, they married and began their incredible journey of life together for 28 years.  To this union was born their son, Austin Kimble Wesley on June 4, 1996.    Shawn worked to fill their lives with joyful times, wonderful travels and meaningful experiences.  The bond the three of them share is reflected by the picture with their joined hands on the last page of this program. To know Shawn outside of the job was to know a person who demonstrated his love for family and friends.  We will miss his ability to remain calm and supportive no matter what the situation.   We will also miss the way that only he could set up the picnic tent and grill, in good weather or bad, smoke the meats until they fell off the bones or you could cut them with a fork, his delicious “ugly corn” and the fabulous turkey breast that took our taste buds to another level.   And did Shawn ever enjoy the Red Wings hockey and the U of M football games.  You just needed to be very careful what you said about those teams when you were around him!  Shawn was that “laid back, quiet, life of the party” person; the one that you’d look around and say “where’s Shawn” when you didn’t see him; you just knew things wouldn’t be right without him there.     Shawn served the Detroit Police Department with professionalism and distinction for 32 years, achieving the ranks of Investigator, Sergeant, and then Lieutenant in November, 2013.  During his career, he worked with Tactical Services, Records Identification, Internal Affairs, Notification and Control, as Chief of Staff, with the Medical Section, Homeland Security and Communications. Shawn managed many successful investigations and received numerous citations for service, including awards for his handling of large scale events such as the All Star game, two Super Bowls and the Rosa Parks Funeral.  While at his last assignment with Communications Operations, Shawn sustained life threatening injuries during work.  He was immediately attended to by members of the department and transported to the hospital. The family is very thankful to those in the department who helped him, and appreciates the many colleagues who expressed what Shawn meant to them personally. Shawn departed his life on earth on Tuesday, March 27, 2018.   He is survived by his wife, Kathie, his son, Austin; his parents, Thomas and Lorraine Wesley; his sister, Sonya Wesley, his father-in law and mother-in-law, Lawrence and Audrey Rice; sisters-in law and brothers-in law, Edye Rice, Lawrence and Tracey Rice; Jacqueline Rice, Michael Rice; and a hosts of aunts, uncles, nephews, nieces, cousins, grandnephews and grandnieces and family and friends. Remembering My Son (Shawn asked Kathie to let his son know some expressions of love that he may not have had a chance to personally tell him).   “When you came into this world in 1996, Austin, you brought a love into my heart that I had never experienced.  When you spoke your first words and walked your first steps, the joy that you gave me will always remain.  You taught me the meaning of true and unconditional love.   Now that you are older, I have seen such an amazing person you’ve become.  Being a police officer for so many years has taught me that strength takes many forms.  I have seen in you strength, integrity and a determination that will not be silenced.   Over the years, Austin, you have made me proud to be your father.  Never forget that.  Even though I am no longer here, love leaves a memory that no one can steal.  Always remember in good times and bad that tears are a source of strength and not weakness.  I love you, Austin.   You are my greatest gift and everlasting joy forever.  Dad”

Shawn Kimble Wesley was born on October 5, 1966 to Thomas and Lorraine Wesley in Detroit, Michigan.  Shawn, along with his two sisters, Sonya and Senita were raised in a loving home where their parents provided a rich foundation of support that... View Obituary & Service Information

The family of Lt. Shawn Kimble Wesley created this Life Tributes page to make it easy to share your memories.

Send flowers to the Wesley family.