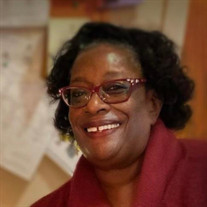 On March 11, 2022, our beloved Sharyn Williams-Johnson transitioned into the arms of our Lord, surrounded by her loving daughters. Sharyn was born on December 1, 1954, at Fostoria Hospital in Fostoria, Ohio. She was the third of five children born to Joseph and Ethel Mae (Thomas) Williams- Alexander. She spent her early years in Fostoria and graduated from Fostoria High School in 1973. Sharyn grew up as a member of Bethel Baptist Church, where she was baptized and learned to love the Lord and her church. Later in life Sharyn’s spirituality found a home at Bethlehem Temple of Praise, (in the greater Detroit area) where she was an active member. Sharyn, particularly, enjoyed her nightly prayer group each evening. It should be said that she left this earth a better place than she inherited. Sharyn always possessed a strong desire to help people. Even at a young age, Sharyn had a very giving and tender heart. She was viewed as having all the right answers and was often referred to as the “Adult in the Room”. She believed in the strength of family and was committed to always doing the right thing. Sharyn pursued her career dream of becoming a social worker by earning a Bachelors’ Degree in Social Work (BSW) from Ohio University and then her Master of Business Administration (MBA) from the University of Phoenix. Sharyn spent most of her career working for the Coalition on Temporary Shelter (COTS) in Detroit where Sharyn retired as Chief Operating Officer (COO) in 2021. Truly, her passion was helping those with no home find their way. Sharyn was a member of numerous organizations and held many professional certifications. While at Ohio University she became a Kappa Kitten. She later served as a board member for the Continuum of Care – Homeless Action Network of Detroit; Chairperson for The Wellness Group; and Board member of the Northwest Guidance Center; and COTS Human Services Committee. In 1986, Sharyn met the love of her life, William P. Johnson (Bill) of Cincinnati, Ohio. They married that next year were blessed with two beautiful daughters, Shelby and Cherelle. Together they built a wonderful life that spanned across three decades (34 years) and three states which lasted until Sharyn’s untimely passing. Her happy place was fellowshipping with her family, friends, her church and reading (shout out to Steven King and James Patterson). Sharyn’s smile was contagious, and it always lit up a room. When she entered the room, you knew that everything was going to be alright! She could sit and talk to anyone for hours on a vast variety of subjects- her favorites being politics and guidance. Sharyn had an enormous impact on so many individuals. She loved to shepherd people to the magnificent love of God. From an early age, Sharyn’s love of travel was boundless. She especially loved her family trips to be with her New Orleans and Cincinnati families. Her favorite foods were ‘Nawlins gumbo and fish (she especially loved Bill’s fried perch and walleye). Sharyn really enjoyed Creole culture. Sharyn leaves behind to cherish her memory; her loving husband Bill (William) Johnson, two adoring daughters Shelby Johnson and Cherelle Johnson, her mother; Ethel Williams-Alexander, three brothers Malcolm (Madeline) Williams, Bruce (Lois) Williams, Orlando Williams and one sister, Vanessa Williams, and a host of cousins, nieces, nephews, and friends too numerous to mention. Sharyn was preceded in death by her father Joseph Williams. Our beloved Sharyn, aka mom, aka Sha Sha, aka Sam will truly be missed.

On March 11, 2022, our beloved Sharyn Williams-Johnson transitioned into the arms of our Lord, surrounded by her loving daughters. Sharyn was born on December 1, 1954, at Fostoria Hospital in Fostoria, Ohio. She was the third of five children... View Obituary & Service Information

The family of Sharyn I. Williams-Johnson created this Life Tributes page to make it easy to share your memories.

Send flowers to the Williams-Johnson family.