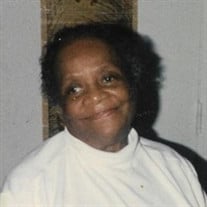 Mrs. Sarah Gray, 98, was devoted to her family and had a firm belief in God who supported her in this valiant battle with Dementia.  She entered into the ultimate healing when she returned to her heavenly home on Sunday, August 20, 2017 at 9:20... View Obituary & Service Information

The family of Sarah Gray created this Life Tributes page to make it easy to share your memories.

Send flowers to the Gray family.