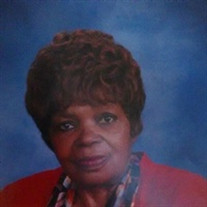 Sadie B. Worthey, beloved wife, mother, grandmother, sister, aunt and rock to her family was called home to be with the Lord Sunday, March 10, 2019 under the care of hospice and surrounded by her loving family.  Sadie was born June 7, 1939 in Florence, Alabama to the late William and Eddie Lee (Edwards) Brewer. She accepted Christ as her Lord and Savior at an early age and served tirelessly at the Higby St. Church of Christ until her illness prevented it; under the leadership of James L. Burrus, Ministering Evangelist. Through the years, Sadie held various jobs, such as daycare provider and the Jackson Harness Raceway; but her proudest accomplishment was making sure her children and grandchildren were introduced to Christ by attending Sunday school and worship service. She worked behind the scenes to help prepare souls to be baptized as she served on the baptismal committee.  Also, for over 20 years, she labored in the Free Blessing Shop/Pantry at the Church of Christ; which feed and clothed the underserved in the Jackson community. She enjoyed traveling with her family and church family; as long as it didn’t involve flying, she did not like planes and would not fly. Preceding Sadie in death are her parents; brother, William (Sonny) Brewer; granddaughter, Brianna Brown and grandson, Marshan Worthey. Leaving to cherish her memory are her husband, John Worthey; two sons, Donald (Debra) Brown and Christopher Brown; four daughters, Bettistea Brown and Alma Brown all of Jackson,Michigan, Lynn Brown of South Carolina and Ellen Brown; two grandchildren she raised, Montez and Tawana Worthey all of Jackson, Michigan; brothers, Steve Brewer of Dearborn, Michigan, Randolph Brewer of Ypsilanti, Michigan; and sister, India Brewer of Ypsilanti, Michigan; eighteen grandchildren, Donte (Kat) Brown, Antione Thomas, Stepheno Thomas, Shariesha Thomas, Alisha Reese, Antionette Reese, Robert Brown, Deonta Brown, Tenisha Brown, Danielle Richardson, DeMario Richardson, Desiree Johnson, Dalisa Brown, Alisha Stewart, Allen Stewart, and Tomika Stewart; over forty great grandchildren, and a host of nieces, nephews, cousins and friends. Along with her family, Mrs. Worthey wishes to extend a heart-felt thank you to the University of Michigan Health System of Ann Arbor and Great Lakes Hospice for the special care she received during her illness and transition.

Sadie B. Worthey, beloved wife, mother, grandmother, sister, aunt and rock to her family was called home to be with the Lord Sunday, March 10, 2019 under the care of hospice and surrounded by her loving family.  Sadie was born June 7, 1939 in... View Obituary & Service Information

The family of Sadie B. Worthey created this Life Tributes page to make it easy to share your memories.

Send flowers to the Worthey family.