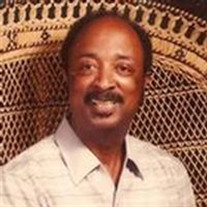 Roosevelt Turner was born in Macon, Georgia on December 7, 1932, the tenth child of Josephine and Henry Turner, Sr. Preceding him in death are nine of his ten siblings, Howard, Harold, Ruby, Ethel,William, Charles, Roy, Doris, and Henry. He was affectionately known as Rex. Rex was a quiet child. He liked to ride bikes, and sometimes went skating. He loved to spend time on his brother’s farm of over 300 acres around Jeffersonville, Georgia, near Macon, where he loved to ride horses. This farm still remains in the family. In 1951, Rex moved to Detroit to live with his older sister, Ethel. He attended Northern High School and received his high school diploma on June 22, 1951. It was Rex’s strong sense of loyalty to his country that prompted to enlist in the Marine Corps in his senior year of high school. While in the Marines he earned four medals: The UN Service Medal, the Korean Service Medal, the National Defense Medal, and the Good Conduct Medal. He received an honorable discharge from the Armed Services of the United States Marine Corps on February 20, 1955. It was at Northern High School that he met Barbara Ann Beard,whom he eventually married after his return from the Marines. From that union came Anthony, Sandra and Gregory Turner. Rex loved to learn and taught himself many trades. He was good with his hands,and loved to build. He ran a roofing business, was a mailman, and a prison guard at the Detroit House of Corrections. He studied at home to obtain a First Class Stationary Engineering License, as well as a First Class Refrigeration License, and began working as an engineer at Detroit Public Schools in 1967, where he remained for the next 30 years. Rex brought his love of the land to Detroit, where he maintained a beautiful vegetable and fruit garden in the backyard. His family enjoyed collard greens, fresh grapes, cucumbers, tomatoes, and strawberries, all from his garden in their backyard, where he also built a beautiful stone barbecue pit. Rex loved his family. He would often take his children fishing, and tried to pass on to them his love of jazz music. He was a good provider for his children, and encouraged his sons to study and obtain their Engineering license, thereby providing them both with the qualifications for good, steady employment. Even after his daughter, Sandra, was married with children of her own, Rex continued to bring her food and kept a room in his house for his grandson, Andre. Rex was a bible scholar, and held bible study with his sister, Joanne, many times in his later years. Our Merciful Lord allowed Rex to spend two of his last three weeks in this world in his daughter’s house, under her care. While there, he and Sandra were able to have long conversations about his life, and watch his favorite shows, which included the Road Runner cartoons, cowboy movies, Combat, and Fred Sanford. On February 13, 2016, surrounded by his sister and children, he made his transition to be with His Lord. Rex leaves to cherish his memory his sister, Joanne Johnson, his three children—Anthony, Gregory, Sandra, his son-in-law, Henry Battle, seven grandchildren—Andre, Victor, Jr., (Tanesha), Danté (Alice), Alicia, Aqueelah (Enrico), Kimberly, Brandon, and his twelve great-grandchildren, Andre, Jr., Correion, Dania, Yvette, Christian, Cameron, TrèVonta, Tierani, Taylor, and Dante, Jr., and a host of friends and relatives.

Roosevelt Turner was born in Macon, Georgia on December 7, 1932, the tenth child of Josephine and Henry Turner, Sr. Preceding him in death are nine of his ten siblings, Howard, Harold, Ruby, Ethel,William, Charles, Roy, Doris, and Henry. He... View Obituary & Service Information

The family of Roosevelt Turner created this Life Tributes page to make it easy to share your memories.