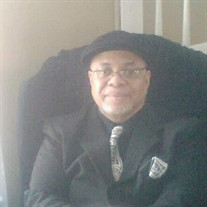 Roland Leon Williams, Jr. was born on November 19th, 1951, to Roland, Sr. and Dorothy Williams in Jackson Michigan. As a youngster Roland was able to travel around the world as his father served in the military. After Roland, Sr. completed his service to his country, the Williams family relocated back to Jackson Michigan where Roland, Jr. was able to matriculate through the Jackson Public Schools. As a young man Roland met the love of his life, Patricia. However, as history tells, Patricia would often share with her friends, “I can’t stand Roland”, Yet with Roland’s charm and charisma, he was able to win Patricia’s heart and was later married by the late great Pastor Amos Polk Williams. As time went on and the seasons changed Roland, decided that he wanted to be a better man and knew to that required a strong relationship with Jesus Christ, after much learning, Roland was baptized at the Second Missionary Baptist Church, where he served the Lord and his church faithfully, under the leadership of Pastor Amos Polk Williams, and later Roland’s son Pastor Darius L. Williams, Sr. In Roland’s service to the church, he loved to sing and was a member of the Male Chorus, inspirational choraliers and mass choir. He also served as a Sunday school teacher for 35 years, teaching teenage boys and girls. Roland desired to be a father; he and his wife Patricia with much and prayer and guidance from the Lord opened their hearts and home to children who did not have love and or place of their own and became foster partners. Giving shelter, love, and sense of belong to nearly 40 foster children from all over the state of Michigan and adopted 7 children of their own. After adopting, Roland shared his heart as a father figure to many and was known as the “Father of Maple Street.” Roland was an avid sports fanatic; However, football was his passion. One of his most significant football accomplishments was playing for the Jackson Chargers alongside his best friend of 50 years, Michael McClelland. For years Roland and Michael could be found watching the Jackson High School Vikings, football teams. Or having a “heated discussion” on which team was better, Michigan or Michigan State. Roland also loved, traveling, cooking, playing pool and spending time with his family. He was very meticulous about his suits, always saying that his suit and tie “Has to coordinate” Roland will be forever remembered for his heart of gold, infections laugh, pure nature. Roland heard the Lord’s call and was ushered into the arms of Jesus Christ on Wednesday, November 18th, 2021. Roland is preceded in death by his parents; Deacon Roland Williams, Sr., his; Mother Deaconess Dorothy (Baxter) Williams and sister; Evangelist Pamala Williams. Roland leaves to cherish his memory; his bothers; Calvin (Alicia) Williams, Geoffrey (Alycia) Williams, his wife; Patricia Williams of 49 years, his children; Roshawn (Tabitha) Williams, Jason (Amber) Williams, KaSondra Williams, Antonio Williams, Darius (Mia) Williams, Myron Williams, and Nisha Williams, sixteen grandchildren, and special friend; Michael McClelland, along with a host of nieces, nephews, relatives, and friends. Roland will surely be missed by his family and all who knew him.

Roland Leon Williams, Jr. was born on November 19th, 1951, to Roland, Sr. and Dorothy Williams in Jackson Michigan. As a youngster Roland was able to travel around the world as his father served in the military. After Roland, Sr. completed his... View Obituary & Service Information

The family of Roland Leon Williams Jr. created this Life Tributes page to make it easy to share your memories.

Send flowers to the Williams family.