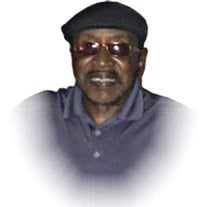 On April 14, 2019 God has called our loving Robert Earl Scott, Sr. to be home with the Lord. Robert was born on March 16, 1951 in Thornton, Mississippi to the late James Scott, Sr. and Eve (Jenkins) Davis. Robert accepted the Lord in 1973 at Mt. Zion Church of Deliverance in Jackson, Michigan where he later served as a deacon. He also married his wife Pearley Scott the same year; from their union they have five children.  Robert was a remarkable man and a great provider for his family. At the age of 36 he started his own successful charter and limousine company named American Transit & Tour from 1987-1999 in Jackson, Michigan which he also expanded to Detroit, Michigan. Throughout the years Robert had continued his passion with driving for various charter and limousine services , he also worked as a salesman at various car dealerships in New Jersey. Robert later moved to Memphis, Tennessee where he worked at Tennessee Limousine as a driver, not only was he employee there he was their family from March 2014-April 14, 2019.  Robert loved driving, he also loved to dress, always top notch from head to toe. Robert was known for his style, his smile, and his cool walk. Besides the outer appearance Robert had a heart of gold, lovable, caring, and had charisma, just someone who everyone genuinely loved.   Robert was preceded in death by his father; James Scott, Sr., mother; Eve Davis, grandmother; Mattie M Jenkins, brothers; James Scott, Jr., Anthony Scott, and Eddie Gene Scott, and sister; Linda Hudson.  Robert leaves to cherish his memories his wife; Pearley Scott of Vineland, New Jersey, three sons; Lorenzo Scott of Jackson, Michigan, Robert Scott, Jr. ( Doreen Scott) of Sicklerville, New Jersey, and Timothy Scott of Philadelphia, Pennsylvania, two daughters; Andrea Scott of Mayslanding, New Jersey, and Yolanda Scott of  Millville, New Jersey, seventeen grandchildren, twelve great grandchildren , ten brothers and sisters; Ommie Taylor, Johnie M. Broady, Prince Hudson (Barbara), Larry Hudson (Fay), Diane Alexander ( Lonzella, Sr.) Delores Price (David) Cher Scott, Ollie Gause, Willie B Scott and James Shipp; he had very close relationships with his sister in laws; Bobbi Scott, Jacquline Doss, and Katina Jones, and a host of nephews , nieces, cousins and friends.  Robert will be dearly missed; we will always love and remember you.

On April 14, 2019 God has called our loving Robert Earl Scott, Sr. to be home with the Lord. Robert was born on March 16, 1951 in Thornton, Mississippi to the late James Scott, Sr. and Eve (Jenkins) Davis. Robert accepted the Lord in 1973 at... View Obituary & Service Information

The family of Robert Earl Scott, Sr. created this Life Tributes page to make it easy to share your memories.

Send flowers to the Scott, family.