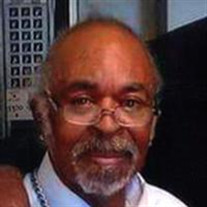 Robert Dennis Rhodman, Jr. was born on August 19, 1954 in Detroit, Michigan to the loving union of Robert Dennis Rhodman, Sr. and Lillian Rhodman. Robert was the second oldest boy of eight siblings; Ronald Glass, Linda Muhammad, Bennie Rhodman, Darryl Rodman, Dana Rodman, Sr., Angela Nance and Christina Aduku (Peter). As a young adult Robert was baptized at Mt. Zion Baptist Church. He attended public school at Northwestern High School and obtained his high school diploma. He enjoyed dancing with family and friends at family functions. He enjoyed watching western movies as well. Most of all he loved spending quality time with his children and grandchildren. Robert was a fun and loving person who loved to dress, especially with his jewelry. Robert was a caring, loving strong survivor whom respected everyone. Robert was loving, hardworking and enjoyed helping any and every one. He truly loved his family and life. He was a great person who will be missed dearly. Throughout his life he worked at Michigan Bell, doing shift yard, and production work. He also enjoyed home improvement as a painter. Robert's favorite quotes were "Only the strong survive and the weak bares" and "you pretty, but not as pretty as me." Robert was called to rest on March 22, 2016. He leaves to cherish is memory, seven daughters; Bennette (Brian), Yvette (Alvin), Cantrella, Florrene , Dorethy , Marlene, and Barbara (Billy), one son; Robert, Jr. , sixty-nine grandchildren, a loving grandmother; Mary Rhodman, three aunts; Ann Weaver, Gladys Williamson and Willietta James and he also leaves a host of nieces, nephews, cousins and friends. He will join his parents; Robert & Lillian Rhodman and his grandparents; Bill Rhodman and Elize and Mammie Williamson. May they rest in Heaven.

The family of Robert Dennis Rhodman, Jr. created this Life Tributes page to make it easy to share your memories.

Send flowers to the Rhodman, family.