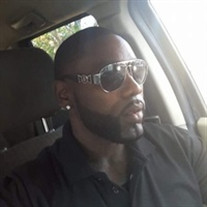 Rickey Ramone Dempsey was born on February 15, 1983 to Dieadra Dempsey and George Thrash, Jr. in Gary, Indiana. Ricky attended schools in both Gary, Indiana and in Jackson, Michigan. He completed his education in Wisconsin with a Diploma in 2015. He was very proud to be working construction for WBI Insulation to provide for his family at the time of his death. Rick was known for his big smile and his eagerness to help all those around him, especially his friends and family. He was always flashing that big handsome smile while grabbing you with his big muscles, giving a tight hug to all that knew him. Rick was always referring to those close to him as “bro, sis, nephew, auntie, uncle, or moms”. The only thing bigger than his smiles and muscles was Rick’s big heart. Rick’s gift was always giving to others he loved. He was preceded in death by his father; George Thrash, Jr., maternal grand-parents; Marshall and Mildred Dempsey, and his paternal grandmother; Shirley Thrash Hamblin. He leaves to mourn, his mother; Dieadra Dempsey (Gary, Indiana), his sisters; Keyonna, Lasonya, and Latoyia (all of Gary, Indiana), Kristy, of Alabama, Keke, of Georgia, his brothers; Lamar (Gary, Indiana), Ira (Indianapolis, Indiana), LeShon and Steven, both of Alabama, his grandfather, George Thrash, Sr. of Gary, Indiana, and his children; Rickey, Rikeena, Michael, Devon, Tianna, Calayjah, Rickyah, Rickarion, Raziyah, Alanna, Alayah, Tristan, Lamar, Rickayla, Rickariana, Rickhari, Kyree, Tashaun, Taevion, and Ra'marion, all of Jackson, Michigan. Rick’s greatest joy was providing for his children and family. He was greatly loved by them all, and he will be greatly missed forever.

Rickey Ramone Dempsey was born on February 15, 1983 to Dieadra Dempsey and George Thrash, Jr. in Gary, Indiana. Ricky attended schools in both Gary, Indiana and in Jackson, Michigan. He completed his education in Wisconsin with a Diploma in... View Obituary & Service Information

The family of Rickey Ramone Dempsey created this Life Tributes page to make it easy to share your memories.

Send flowers to the Dempsey family.