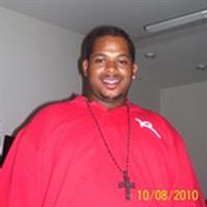 A Time To Be Born: Ricardio (Ricky) LaJuan Harris was born on June 12, 1988 in Detroit, Michigan to Tisha Tee Reed and Ricardo Harris. A Time To Build: Ricky attended Detroit Public Schools and completed his high school studies in Chicago Illinois. At his untimely death he made the decision to begin studying to acquire a skilled trade. Just as so many young men have to venture into different fields to get a true understanding of their passion, he was working in the restaurants doing every necessary task because he wasn’t afraid of building and working his way to excellence. A Time To Love: As Ricky life was cut short in the prime of his life, he wanted to be a father. His desire was to marry and have two children, a boy and a girl. A Time To Embrace: Ricky was a determined young man who wanted to beat the odds of many young African American males living in the rough streets of Detroit. Ricky experienced some troubling days but Ricky never allowed that to stop his desire to be more than what statistics said he would be. Every stumbling block, Ricky used to build his strength and determination and Ricky’s future was so bright. Ricky was a devoted son to his parents, confidant to his peers and made beautiful bonds with family, especially his younger cousins, nieces and nephews. and friends. His admirable personality will be missed and his smile irreplaceable. He loved to travel after many years of his mother making unplanned trips that were sometimes too spontaneous for herself. His true passion was shopping for shoes, clothes, watching and playing sports. A Time To Die: On Friday, September 23, 2016, the Lord in his infinite wisdom blessed our family with another angel. As Ricky slept with his loved ones by his side, God silently received the life of our son. At that hour, the rough side of the mountain was climbed and the victory was won. A Time To Mourn: Ricky leaves to cherish his memory two sets of parents: his mother, Tisha Barnes; father, Allen Barnes; father Ricardo Harris, mother, Shanera Harris; three brothers, Camden Barnes; Kendarius Bass, and David Reams IV; three sisters, Alishay Barnes; Torianna Bass, and Jeanetaa Bass. He also leaves to cherish his memory, maternal grandmother, Nina Flowers; paternal grandmother Janet. Harris; Aunts, Tasha Walker; Donna Reed (Alvin); Nina Red; Kristian Walker. Uncles, Jason Walker; Justin Walker; Hayward Flowers, Jr.; nephew, Camden Barnes, nieces Kaylin Barnes, Ja’zharea Bass, Da-Nyla Reams, Rylee Reams; Godmothers, Chleotha Maddox and DeShawn Bloxson; God daughter Lailah, and special aunt Evelyn Marie Sherman. and a host of cousins and friends. He was preceded in death by his maternal great grandmother Juanita Flowers, maternal great grandfather Hayward Flowers, Sr, maternal grandfather Wiley Reed; Aunts, LeAnn Adams, Carol Walker, Kenetta Harris; uncle, Kenneth Harris. A Time Of Peace: Do not stand at my grave and weep I am not there; I do not sleep. I am a thousand winds that blow, I am the diamond glints on snow, I am the sun on ripened grain, I am the gentle autumn rain. When you awaken in the morning’s hush I am the swift uplifting rush of quiet birds in circled Flight. I am the soft stars that shine at night.

The family of Ricardio LaJuan Harris, Jr. created this Life Tributes page to make it easy to share your memories.

A Time To Be Born:
Ricardio (Ricky) LaJuan Harris was born on...

Send flowers to the Harris, family.