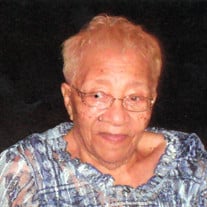 Regina Nettie-Rose Jackson was born March 6, 1923 in Acworth, Georgia, to the union of the late James Johnson and Nettie Johnson. Regina had two sisters who preceded her in death; Catherine Johnson (Ed) and Irene Bedford (William). Regina had... View Obituary & Service Information

The family of Regina Nettie-Rose Jackson created this Life Tributes page to make it easy to share your memories.

Send flowers to the Jackson family.