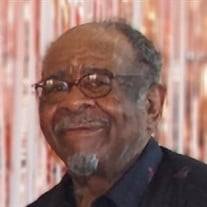 Raymond Wheeler, Sr. was born in LaFayette, Georgia to Ulysses F. and Dollie Marsh Wheeler on July 30th, 1934. He was one of thirteen children born to this union. He received his formal education in the Walker County School System in LaFayette, Georgia. Raymond’s sister, Annabelle Smith, brought him to Cleveland, Ohio in 1952. In February 1954, Raymond married the love of his life, Thelma Ruth Wilson and to this blessed union seven children were born; Betty Lynn, Raymond, Jr., Brenda Lee, Cynthia Ruth, Richard Robert, Kennedy, and Kevin Dante. Raymond was employed as a heavy equipment operator with the Operating Engineers Local 18 until his retirement in 1996. Raymond was a hardworking man that provided for his family. He went above and beyond to make sure his family was never without. He never missed a day of work. There was a time he broke his ankle and even though he was in a cast, he would wrapped his foot in a plastic bag for protection and head to work. Raymond loved his children, grandchildren and great-grandchildren. He was their bus driver to and from school, babysitter, and mentor; he was just always there for them. A very friendly man who had a GREAT sense of humor, Raymond loved to garden. He was great neighbor. From shoveling snow to tilling gardens to home renovations and car repairs, there was no task that he couldn’t handle. He was known as the father of the village and was loved by many. Deacon Raymond Wheeler, Sr. later joined Pilgrim Community Church of God under pastoral leadership of Rev. Thelma R. Wheeler. He was an active and faithful member of the church. He was responsible for most of the renovations that took place over the years. Raymond was a Godly man. He always started his day reading the Bible and going over to the church daily for prayer. His children; Betty L. Jameson and Raymond Wheeler, Jr., both preceded him in death. He leaves to cherish his memories, his beloved wife; Rev. Thelma R. Wheeler, his children; Brenda L. Wheeler, Cynthia R. McGee, Richard R. Wheeler, Kennedy Wheeler, and Kevin D. Wheeler (Gayle), he also leaves behind 12 grandchildren and 29 great-grandchildren and a host of nieces, nephews, cousins, and friends. Raymond will be greatly missed.

Raymond Wheeler, Sr. was born in LaFayette, Georgia to Ulysses F. and Dollie Marsh Wheeler on July 30th, 1934. He was one of thirteen children born to this union. He received his formal education in the Walker County School System in LaFayette,... View Obituary & Service Information

The family of Raymond Wheeler created this Life Tributes page to make it easy to share your memories.

Raymond Wheeler, Sr. was born in LaFayette, Georgia to Ulysses...

Send flowers to the Wheeler family.