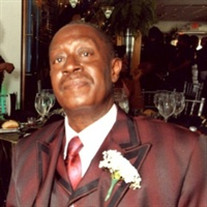 Raymond Warrior was born on January 4, 1955 in River Rouge, Michigan to John Wesley and Josephine Warrior. Raymond confessed his life to Christ at an early age and was baptized at Beacon Light Missionary Baptist Church under the leadership of the late Pastor James W. Abbott, where he served for a lengthy time. Raymond was educated in the Detroit Public School System and graduated from Southwestern High School, with honors, in June of 1973. After leaving high school he entered into Wayne State for a short time period. Raymond had a desire to serve his country so he enlisted into the Army National Guard, where he was given the nickname Rambo from his other peers before being honorably discharged. His first job was at the Fox Theater as an Usher. He also worked for the City of Detroit Water & Sewage Department as a water tester until he worked his way up to becoming a professional photographer and a gifted writer to cover stories for the Mayor of Detroit to be published in the Public Works Magazine. He retired in August of 2010 after 30 years of service with the City of Detroit. Raymond was a kind, humorous, very stubborn at times, yet intelligent individual. He loved to draw & paint, and was a great singer. He loved to sing Luther Vandross saying, “Oh I can hold a tune.” He won a drawing contest and the drawing is still displayed at the Detroit Institute of Arts. Raymond also learned martial arts and earned a fourth degree black belt and eventually began teaching martial arts at Southwestern High School. He had challenges despite his own sickness. Raymond became the father of a beautiful daughter; Kenyetta Crawford. He then met and married Laura T. and to this union another beautiful daughter was born; La’Rai Warrior. Raymond departed this life on January 25, 2018. His was preceded in death by his parents and two brothers; Kenneth and Michael Warrior. He leaves to cherish his memory his two daughters; Kenyetta Crawford and La’Rai Warrior, five brothers; Wesley (Shanice), Carl, John (Yvonne), Leonard (Felicia), Michael (Letha), two sisters; Carolyn and Delphine, a bonus sister; Brandiss, ten grandchildren; Amari, Giovanni, Nai’la, Tyliah, Ronnie, Jakiara, Chanden, Shanel, Cedric Jr., and Unsail Jr., one great-grandchild, three step-children and a host of aunts, uncles, nieces, nephews, and cousins.

Raymond Warrior was born on January 4, 1955 in River Rouge, Michigan to John Wesley and Josephine Warrior. Raymond confessed his life to Christ at an early age and was baptized at Beacon Light Missionary Baptist Church under the leadership... View Obituary & Service Information

The family of Raymond Warrior created this Life Tributes page to make it easy to share your memories.

Raymond Warrior was born on January 4, 1955 in River Rouge, Michigan...

Send flowers to the Warrior family.