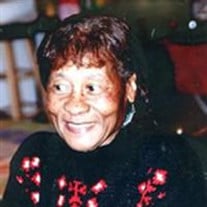 Ms. Pauline Wells Taylor Wilson, was born September 6, 1936 to Mr. Robert Wells, Jr. and Mrs. Eula Wells in a small town in Attala County Mississippi, called Kosciusko. At the age of 11 years old she came to Ann Arbor, Michigan to live with her grandparents; William and Ella Haywood. There she attended Jones School before briefly returning to Mississippi. She then returned to Michigan and moved to Jackson with her family. This is where she met and married Mr. Boston Lee Taylor; three children were born from this union. Pauline then moved to Lansing, Michigan until the death of her husband in 1963. She then moved back to Jackson and remained there until 1971 when she met and married Mr. James Wilson, they then moved to Ann Arbor where she lived on and off for the next thirty six years. Pauline was proceeded in death by her parents; Eula and Robert, six brothers; McKinley, John, L.C., Louis, K.C. and Thomas Lloyd, her Aunt; Mary Holmes, Uncle; Henry Haywood, of Ann Arbor, whom she cared for until their death, four other aunts, her two husbands; Mr. Boston L. Taylor and Mr. James Wilson, one son; Mr. Robert L. Taylor, Sr. and one great-grandson; Louis Wyatt, Jr. She leaves to mourn and carry on her legacy one sister, Mrs. Florida Miller, of South Carolina, one daughter; Ms. Pearlean Taylor of Jackson, one son; Leon Taylor, of Carson City. 7 grandchildren; Andrea M. Taylor, Tyrell Broughton, Yalonda Taylor, Natica(Donell,Sr.), Nicole Ryan, Boston Taylor, II, and Robert Lee Taylor, Jr. and 10 great-grandchildren; Mikeala Cotton, Eulacia Taylor, Robert Bills, Jr., Eulonday Taylor, Donell Ashley, Jr., Lachelle Wyatt, Eumari Lindsey, Taija Lewis, Eu’Dajae Harris and Da’Shae Harris, all of Jackson MI. Pauline worked as a CNA and a private duty HHA,III since she was 15, she also worked as a presser for Snow White Laundry with her mother- in-law, Mrs. Annie Pearl Johnson. She was a member of the SUPREME GRAND LODGE of the INTERNATIONAL FREE & ACCEPTED MODERN MASONS, Roll No. 64 member of Joan D’Arc Lodge No. 20 of Jackson Michigan since 1963. She was a devoted woman to whatever she set out to accomplish, whether it be church, or helping her community where she lived. She believed in God, whom watched over her until her passing on the morning of Thursday, July 28, 2016, surrounded by her family and in the care of Hospice of Great Lakes Caring.

The family of Pauline Wilson created this Life Tributes page to make it easy to share your memories.

Send flowers to the Wilson family.