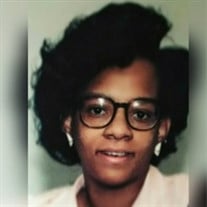 Paulette Michelle Gibson was born on January 23, 1959 to the union of Treamon Hicks Sr. and the late Pauline Hicks. She attended Hamtramck Public Schools and graduated Cum Laude in 1977.She was one of the first African Americans to play Tennis in the city of Hamtramck and played with excellence. She had a deep passion for music and began playing the piano in her formative years.                 Paulette moved to Albion Michigan in the fall of 1977 and attended Albion College. She met and married Benjamin Gibson and within their union they were blessed with seven children.  She later returned to school, obtaining an associate’s degree in Early Childhood Education from Kellogg community College and was inducted into the National Honors society. She then returned to Albion College and victoriously earned her Bachelor's Degree in Children’s Literature. Paulette accepted Christ at an early age and was deeply involved in the church throughout her entire life. As a young child, she sang in the Tenderheart’s Children’s Choir. As a member of Grace Temple, Church Of God In Christ, she served as a teacher at the Grace Temple Christian School, and also taught Sunday School. She Directed the Nursery Program and served as a faithful member of the Youth Committee and Women's department. She was also active in the Music Department as co-director of the church's youth music ensemble. Paulette tutored and mentored many in the community in their endeavors of self-improvement.   She had her own licensed Daycare for 12 years, and she homeschooled her seven children for the majority of their education.                 Paulette leaves to cherish her memory her father; Treamon Hicks Sr., seven children; Grace Kendrick (James Jr.), Rebecca Hardy (Bobby Sr.), Gabriel Gibson, Syrian Gibson, Ashanti Gibson, Linsy-Jeremiah Gibson, and Zain Gibson,  eight grandchildren; Bobby Jr. Ariyanna, Yusef, Ana’e Gabrielle, John-Isaiah, Miriam-Rene’e, James III, and Benjamin-Elijah, Godmother; Margie McCree, four aunts, her nieces, nephews, cousins and a host of special sisters, relatives and friends.

The family of Paulette Michelle Gibson created this Life Tributes page to make it easy to share your memories.

Send flowers to the Gibson family.