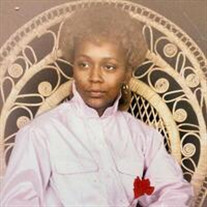 Pauletta A. Durham was born in Charlotte, North Carolina on October 18, 1957 to Thelma Joyce Humphrey and Mack King. Pauletta was the youngest of four. The family moved to Detroit Michigan in 1963. She was educated in the Detroit Public Schools, graduating from Kettering High School in 1975. She was employed at Daves’s Market and Wayne State University. Pauletta was raised in church and accepted the Lord and was baptized. She was an active member of Joseph Campau Avenue Church of God under the leadership of Pastor David Lunn. She participated in the Potter’s Hands (sign language ministry), Bethesda Choir, Cherubim Praise Dance Ministry and was a member of the Board of Trustees. Pauletta was blessed with two sons Terrence R. Humphrey and Andre M. Holmes. Pauletta married Richard Durham June 20, 1987. Their union was blessed with two children, Raven S. Durham and Aaron R. Durham. Pauletta was a very outgoing social person. She loved spending time with her family and friends. Her smile and laugh would light up the room. She enjoyed going to concerts, going out to eat and traveling with her girlfriends. She was an avid reader and enjoyed discussing books with her fellow book club members. One of her favorite past-times was color therapy. Some of her favorite memories were made with her best friends Yvonne Wells, Paulette Jackson and Dr. Felecia Grace. Pauletta enjoyed giving out her famous warm hugs. Paulette’s husband; Richard Durham, her two brothers; Gary B. Humphrey and Elliot C. Humphrey, her brother-in-law; Willie Leon and two sister-in-law’s; Joyce Keys and Mary Hutchinson preceded her in death. Pauletta leaves to cherish her memory her children; Terrence Humphrey, Andre Holmes, Raven Durham and Aaron Durham, her mother; Thelma Humphrey, sister; Katrina Humphrey, seven grandchildren; Shantanice, Kiya, Thomas, Aniyah, Alexis, Cameron and Jayceon, four god-children; Tracy Shipp, Lashundra Bush, Tiffany Griffin, and Maceo Woods, nine bonus grandchildren, a host of great-grandchildren, nieces and nephew

Pauletta A. Durham was born in Charlotte, North Carolina on October 18, 1957 to Thelma Joyce Humphrey and Mack King. Pauletta was the youngest of four. The family moved to Detroit Michigan in 1963. She was educated in the Detroit Public Schools,... View Obituary & Service Information

The family of Pauletta Armonia Durham created this Life Tributes page to make it easy to share your memories.

Pauletta A. Durham was born in Charlotte, North Carolina on
October...

Send flowers to the Durham family.