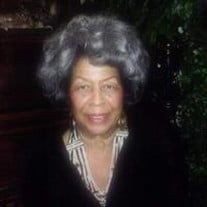 atricia Louise Satcher-Colbert, 76 years old, made her transition on April 10, 2020 at her home in Rives Junction, Michigan. Ms. Satcher-Colbert was born August 18, 1943 in Texarkana, Texas to Edward C. Satcher, Jr. and Mozelle Eddens-Satcher. Patricia was the second eldest of six children. She accepted Christ at an early age and attended services at Pilgrims Baptist Church where her grandfather Rev. Manuel Eddens and her father-in-law Rev. Augustus Love were Co- Pastors. At the present time, the church is Golgotha Trinity Baptist Church in Long Beach. Being the eldest daughter, she spent many years taking care of her younger siblings while her parents worked. She started her earlier career as a singer with Johnny Success performing in and around Long Beach and Los Angles California. She wrote the song “Traveling Boy” of which Johnny Success use to sing. She then transitioned and achieved her Cosmetology License and opened her own shop providing the latest services to customers for many years. Later she returned to school and gained a first-class journalism degree from the University of Detroit-Mercy in 1999 and had a successful career as an investigative reporter in and around the city of Detroit. She developed her own newspaper, “The Inner-City Plow” and became the Editor in Chief. The Inner-City Plow (Ball and Chain Production’s) provided truthful history related to events unique to African Americans. The slogan was “We Dig Up the News”. She married Taylor R. Love in 1959 and from this union her only daughter LaToshia Lynn Love- Baruti (Timur A. Baruti, M.D.) of Rives Junction, Michigan was born. Later, she remarried Samuel Colbert of California and they later relocated to Detroit, Michigan in 1972. Patricia was an avid collector of music. She enjoyed all genres of music from jazz, rhythm and blues, gospel to classical. She was a talented interior decorator, using eclectic motifs from animal prints, priceless collectibles, trendy fads to items from the slavery era. Further, she was political and a strong outspoken advocate for the under-privileged. After retirement, and always advocating for social change, she became interested in social media and voiced her opinions and concerns about problems affecting others. She leaves to cherish her memories, her daughter; LaToshia Love-Baruti (Timur A. Baruti, M.D.) Rives Junction, Michigan, her grandsons; Michael S. Spencer II, of Westland, Michigan, Malcom R. Love of Jackson, Michigan and Branden Love, her grand-daughter; Imani A. Love, a sister Amy Moore of Compton, California, two brothers; Calvin Moore and Thomas Moore of Long Beach, California, and a host of family and friends. A special mention, Michael S. Spencer Sr. of Lynchburg, Virginia.

The family of Patricia Louise Satcher-Colbert created this Life Tributes page to make it easy to share your memories.

Send flowers to the Satcher-Colbert family.