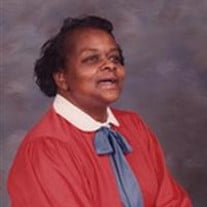 Labor: June 17, 1929 To Reward: December 17, 2016 Sunrise of June 17, 1929 Paralee (Stinson) Purifoy was born to the union of Willie and Marie Stinson in Montgomery, AL. Paralee was the 4th child of seven siblings. Mary, Cliff, Masaline, Ruby Mae, Unise, and Morris Stinson, all preceded her in death. As a child she was educated at Booker T. Washington in Montgomery. She was a strong believer and loved God. She attended Cleveland Ave. Church of God in Montgomery under leadership of Lila M. Meyers. She met the love of her life George L. Purifoy Sr., while attending the Clanton, Alabama camp meeting of the Church of God in 1949, and in 1950 they got married. To this union two sons were born George Jr, 1951 and Frederick in 1952. The couple with their two young sons moved to Michigan in 1953. They became members of Wisconsin Ave. Church of God where the late Dr. Cecil Washington was pastor. She served faithfully in various ministries in the church such as usher, choir member, and kitchen committee and youth leader. From 1953 to 2000 maintaining her devotion through the transition of Lighthouse to Greenfield Ave. Church of God. When she worked, she was dependable, loyal, and gifted. Paralee hobbies, she loved to cook for family, friends and the church. She was known for her famous homemade rolls, beef brisket, and banana pudding! Paralee employment history included The Soss Manufacture, and worked as a domestic engineer for ten years. Paralee most devastating life experience was at the loss of her youngest son, Frederick Jerome Purifoy I, on November 1, 2015. Paralee leaves to cherish her memory a devoted loving husband of 66 years; George Purifoy Sr., one son; George Jr., one grandson; Frederick J. Purifoy II (Geralyn), two granddaughters; Camille Purifoy and Crystal Purifoy, three great-grands; Jamal Mitchell, Mawasi and Aliya, Godchildren; Rosalind Roseboro, Anna Roseboro and Levoid Vickers, Jr. She also leaves her Greenfield Church family and host of relatives and family.

The family of Paralee Purifoy created this Life Tributes page to make it easy to share your memories.

Send flowers to the Purifoy family.