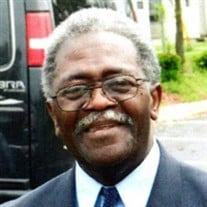 Mr. Oscar Hall, affectionately called “Sonny,” was born in Jackson on July 31, 1936. Using Oscar’s words, he was “prettin near 82”. Oscar was preceded in death by both his father, Oscar Hall, and mother, Ethel (Williamston) Hall.  Oscar was the last remaining offspring of his parents, being preceded in death by his siblings:  Beulah Norris, Wilson Isaac, Namion Isaac, Ethel Mae Walker, Elizabeth Hall, Jerry Hall, Henry Hall, and Michael Hall.    Oscar was a faithful man of God.  He accepted Jesus Christ as his personal Lord and savior at an early age and was a faithful member of Lily Missionary Baptist Church.   Oscar was a long-standing member of the Trustee board, Security Team, and other ministries throughout the church.  One of Oscar’s many acts of kindness was purchasing suits and giving them to men, young and old, so that they could look their best when coming to church on Sunday mornings.   Oscar was very athletic and loved sports. He was a proud graduate of Jackson High School where he received varsity letters in wrestling, football, and baseball.  Oscar was particularly gifted in the game of baseball. His talent was noticed by professional scouts who invited him to try out for the Detroit Tigers baseball team but because of his love of family, and the time commitment required, he had to forgo the offer.  He continued to exhibit his baseball skills by playing in many leagues for many years.  He could also be found on basketball courts challenging anyone (young or old) who thought they were good at the sport - only to be surprised at the skill level Oscar exhibited.  Oscar also loved to bowl and bowled for many years throughout the city.   Oscar held many jobs as a young man before being employed at Fisher Body. After 30 years of service, he retired from Fisher Body. In his retirement he worked as a part time custodian at the Jackson Police department and would often be seen mowing lawns and shoveling snow not only at his home but others that were unable to do it themselves. He taught good work ethic and the significance of loving family relationships to his family and close friends. On September 8, 1978, Oscar married the love of his life, Betty Jean Scott and they spent many hardworking joy filled years loving each other and raising their family of eight children as a team.  It would not take long for anyone talking to Oscar to know his love for his wife and how very important family unity was in his life.  He was an amazing husband, father, granddad, great granddad, and pillar of the Jackson community. Some of Oscar’s final words to his family were, “I don’t want you all crying over me. I have made peace with the Lord” and “I am ready to go home” Oscar leaves behind those who know that he is with the Lord resting in peace, including  His wife, Betty Scott-Hall; His children, Julie Boutire, Keithous Scott of Seattle, Washington, Celeste Hall-Coppage, Jackie Scott of Lafayette, Louisiana , Connie Hall, Oscar (Terri) Hall III, of Memphis, TN, Kim Hall of Botswana, Africa and Antonio Scott of Jackson, MI; God Daughter, Brittany Bradshaw, Southfield, MI; twenty two grandchildren, six great grandchildren and a host of extended family and friends.  His brother in laws Charles Harris of Milwaukee, WI, John Harris, Portland, OR and Brian Harris, South Bend IN.  Sister in laws, Esther (Bishop Nathaniel) Edwards, Lansing, MI, Bobbie Davidson, Harper Woods, MI, Sherrie Taylor, Rhonda Blount, Denise (John) Collins, Paula Harris, Rebecca Harris, and Rose (Sammie) Betts all of South Bend, IN.   Oscar’s stories, kindness, sense of humor, wisdom, thoughtfulness, benevolence, and love will be missed by all who knew and loved him.

The family of Oscar Hall, Jr. created this Life Tributes page to make it easy to share your memories.

Send flowers to the Hall, family.