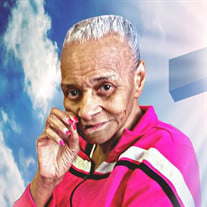 Miss Norgie L. Robinson also known as Norgie passed away Friday, October 9, 2020 at Countryside Care Center in Jackson Michigan, age 77 years old. She was born December 12, 1942 to the late Mr. and Mrs. Allen and Zona (Smith) Robinson in Irondale, Alabama. Norgie was the sixth child of eight children. Norgie attended school in Chambers and Jefferson counties in Alabama. Norgie relocated to Albion, Michigan in 1967. She lived with her mother in Albion for 17 years. She loved the Lord and going to church and was very active at the Mt. Calvary Baptist Church where she served on the Usher Board. Later she attended the Church of Christ, East Chestnut Street in Albion, Michigan. Norgie moved to Jackson Michigan in 1982, where she worked at Goodwill Industries. She attended school in the morning and worked in the afternoon. She was an avid bowler and won several trophies in bowling. Norgie attended Lily Missionary Baptist Church and also served on the Usher Board under the direction of Sis. Emma Houston. Although Norgie could not drive she did a lot of traveling. She attended high school graduations in Jackson and Lansing, Michigan, Birmingham, Alabama and Columbus, Ohio and attended college graduations at Southern University and Louisiana State University. Baseball games in Atlanta, Georgia, family reunions and a wedding in Boston Massachusetts. She was well loved by her family: to know her was to Love her. She leaves to cherish her memory a son; Kenneth (April) Robinson, three grandchildren; Devin Robinson of Jackson, Michigan, Sean Robinson of El Paso, Texas and Kayla Robinson of Los Angeles, California, four great granddaughters; Amariana, Alayah, Aniyah and Aziyah all of Jackson Michigan, one sister; “Sue” (Frank) Murphy of Albion Michigan and one brother; Michael Legion-Robinson of Detroit Michgan, a sister-in-law; Lillian Robinson of Suitland, Maryland and a host of nieces, nephews, great nieces and nephews, great great nieces and nephews and other relatives and friends. Norgie was preceded in death by parents, three sisters; Eukalia Harris, Mae Doris Owens and Billie Oliver, three brothers; Charlie Robinson, Howard Robinson and Leonard Robinson.

The family of Norgia L. Robinson created this Life Tributes page to make it easy to share your memories.

Send flowers to the Robinson family.