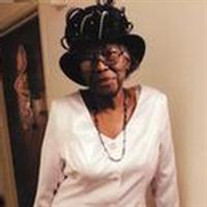 "To everything there is a season and a time for every purpose under the heaven." ~ Ecclesiastes 3:1 Nettie McTere was born on November 2, 1934 in Clayton, Alabama to the late Luether and Newt Hall. She was the youngest of five children. Her brothers Pete, Robert, and Arthur preceded her in death. Nettie's family relocated to Detroit, MI when she was 5 years old. She was educated in the Detroit Public School system and graduated from Miller High School. In early 1953, Nettie met the man of her dreams; Richard McTere Jr. They united in holy matrimony on November 21, 1953 and to this union 7 children were born. One son, Gregory, preceded her in death in 1963. Nettie and Richard were happily married for 63 years! She began her Christian journey at her "mother church" as a charter member of the Metropolitan Church Of God under the leadership of founder Rev. Dr. James Earl Massey and then Rev. Robert O. Dulin. She faithfully served several auxiliaries including the Kitchen Staff, Usher Board, being a Choir Member and she faithfully attended Sunday School. She stayed by her husbands' side as the Lord led them to new membership at the Southwestern Church of God, under the leadership of the late Rev. Lawrence P Wyatt and then Rev. Jack Perkins There, she often baked sweet potato pies and gave them to all the saints at Southwestern. Nettie loved to garden and always kept beautiful flowers planted outside of her house. She loved to watch the "Steve Harvey Show" every afternoon. She was an avid reader, loved to cook and bake, enjoyed working puzzles and loved animals. She would take in strays, both animal and human, if she felt they needed help. Nettie would give counsel to anyone who needed to hear the Word including prostitutes and drug addicts. When a family was burned out from their home, she opened the doors of her home and took them in until they got back on their feet. Because of her unselfish acts of kindness, the old neighborhood dope boys put the word out that nothing was to ever happen to Mrs. McTere or her home. While her husband Rev. McTere traveled across the nation on evangelistic crusades, Nettie kept her family and home intact and made sure that her children wanted for nothing. And while working as a school crossing guard at Dwyer elementary school, Nettie made sure that each child made it to school safely. And if she saw that they were late, she made sure that their mothers knew about it. Sister Nettie McTere was called home to Glory on Saturday, December 31, 2016. She leaves to cherish her memory her loving husband; Rev. Richard McTere Jr., sons; Richard III, James Earl (Angela), Joseph Anthony (Barbara), daughters; Arnise, Denise and Ruth, sister; Vera Mallory, sister-in-law; Wanda Warren, brother-in-law; Reginald McTere, six grandchildren, eight great-grandchildren and a host of nieces, nephews, step-grandchildren, extended family, relatives and friends.

"To everything there is a season and a time for every purpose under the heaven." ~ Ecclesiastes 3:1 Nettie McTere was born on November 2, 1934 in Clayton, Alabama to the late Luether and Newt Hall. She was the youngest of five children. Her... View Obituary & Service Information

The family of Nettie Beatrice McTere created this Life Tributes page to make it easy to share your memories.

&quot;To everything there is a season and a time for every purpose...

Send flowers to the McTere family.