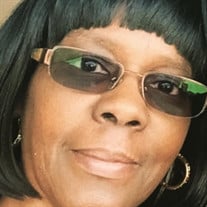 Mira Sylvia Watts was born in Detroit, Michigan to the late Rev. Calvin Lee Watts and Mary Esther Watts. She was one of nine children. Mira graduated from High School with honors! Mira Watts was a former member of Vermont Hancock Church of God, and was also a member of Joseph Campau Avenue Church of God. The family moved to Cleveland, Ohio and attended Euclid Avenue Church of God. As the family grew and relocated! Mira moved back to Detroit and attended Power Centre Church International in Belleville, Michigan. Mira decided to move with her Michigan family to Atlanta, Georgia. The family decided to call Hampton, Georgia home. The Family decided to join The Word of God Christian Ministry in Hampton, Georgia under the Leadership of Pastor Michael J. Gray. Mira worked retail. She was a manager at Macy’s Sunglass Hut. She won numerous Awards and Certificates. She worked at Rose’s in Morrow, Georgia, where she was loved by many. She was a hard worker and believed in taking care of herself and her family. Mira had a passion for her nieces and nephews. She also had much love for her goddaughter Averie Bausley. She went to visit her in Michigan as much as possible. Sports!! Mira loved sports, and often had many loud conversations with people about who was going to win the football, or basketball games. Her favorite teams were the Detroit teams. She loved bowling, puzzles, and shopping with her sister. One of her favorite things was being on the Usher Board and being a greeter at former PCCI (in Belleville, Michigan) and TWOGCM (in Hampton, Georgia). She also loved the Women’s Ministry with First Lady Lisa Gray. “God is Our Refuge and strength, a present help in the time of trouble” Psalms 46:1, is one of her favorite scriptures. Mira was preceded in death by her parents; Reverend Calvin and Esther Watts, two brothers; Calvin Isaac Watts, Jr., and Sergeant Phillip D. Watts. Mira leaves to mourn her passing, three loving brothers; Michael Watts, Harvey Lee Watts, and Johnathan Earl (Patricia) Watts, three sisters; Naomi (Craig) Sawyer, Esther (Edward) Lewis, and Detranel (Timothy) Taylor, goddaughter; Averie Bausley, and a host of nieces and nephews relatives and friends.

Mira Sylvia Watts was born in Detroit, Michigan to the late Rev. Calvin Lee Watts and Mary Esther Watts. She was one of nine children. Mira graduated from High School with honors! Mira Watts was a former member of Vermont Hancock Church of God,... View Obituary & Service Information

The family of Mira Sylvia Watts created this Life Tributes page to make it easy to share your memories.

Mira Sylvia Watts was born in Detroit, Michigan to the late Rev....

Send flowers to the Watts family.