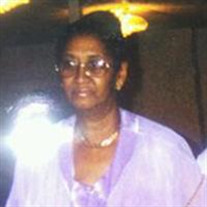 Minnie Beatrice Porter was born on October 12, 1935 in Detroit, Michigan to the union of Alex Simpson Wilkins and Bertha Mae Wilkins; both who preceded her in death. Minnie was the youngest of five children. Her siblings include Gerald, Wallace, Vivian and Barbara; both who preceded her in death. Minnie met and married her soul mate, John Russell Porter, Sr., on April 10, 1955 and to this union three children were conceived: Toni Helena Porter, John Russell Porter Jr., and Anya Mae McDonald; the family grew with the adoption of Laticia Hill. She attended Detroit Public Schools and graduated from Pershing High School. She accepted Christ as her Lord and Savior, and if she couldn’t make it to church, she enjoyed watching religious services on television. She also saw to it that her grandchildren were present in the House of the Lord every Sunday. Minnie’s Family was the center of her life and she worked extremely hard to support them. She worked as a Housekeeping Supervisor at the Hotel Pontchatrain in Downtown Detroit for thirty years, and later became a school teacher for DPS at Spain Middle School, where she retired. Minnie made herself available to help everyone who asked her, and even those who didn’t, never asking for anything in return. Once you became a part of her life, you were family. No matter how long or short the time span of her knowing you, she made it her business to be sure you received a gift every Christmas. Once she retired one of the things she loved most was shopping while lying in bed; QVC had become her best friend. Everyone who knew her felt her warm, loving and gentle kindness. Many lives have been affected by the bright light that shined in Minnie, as well as by her goodness, honesty and most of all, her selflessness. Minnie is survived by her four children; Toni Helena Porter, John Russell Porter Jr. (Glenda), Anya McDonald, and Laticia Hill, two brothers; Gerald Wilkins (Betty) and Wallace Wilkins, fourteen grandchildren, thirteen great grandchildren, and a host of family and friends.

Minnie Beatrice Porter was born on October 12, 1935 in Detroit, Michigan to the union of Alex Simpson Wilkins and Bertha Mae Wilkins; both who preceded her in death. Minnie was the youngest of five children. Her siblings include Gerald, Wallace,... View Obituary & Service Information

The family of Minnie Beatrice Porter created this Life Tributes page to make it easy to share your memories.

Send flowers to the Porter family.