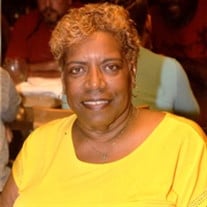 Millicent Paige was born in Memphis, Tennessee to the late James McGrew and Thelma Broadnax McGrew. She accepted Christ into her life at a young age and was baptized in 1963 at Snyder Chapel Missionary Baptist Church in Detroit Michigan. Millicent attended Douglas Elementary School in Inkster Michigan, Kettering High School in Detroit Michigan and later graduated from Southeastern High School in 1966. She began working at the age of 16, taking on jobs that included Security and General Motors for several years before becoming a private duty nurse.   Millicent, affectionately known as “Midget” loved to crochet blankets and travel the world on cruises with family and friends. She enjoyed playing Spades and finding the humor in things to get a good laugh. Midget had a heart of gold and was always available when you needed her. She became an active member of the Sumpter Community Church of God where she served on the Usher board and Kitchen Staff. Later when Sumpter became PCCI (Power Centre Church International) she became involved with Forgotten Harvest who gave out food on Tuesdays to the community. Millicent loved the Lord and encouraged others to pray and attend church.   In 1982, Millicent married the love of her life Edward C. Paige, her Suga Bear of 35 years. She adored Edward and he loved her just the same. Edward spoiled her and he loved to see her smile and the way her eyes would light up with joy warmed his heart. She was a blessed woman.   The Lord called his child home on the morning of February 25, 2018. She was preceded in death by daughter Lolita Paige and leaves to cherish her memory her loving and devoted husband Edward C. Paige, Four children Orlando McGrew, Angela Paige, and Edward Paige Jr. all of Detroit, Michigan, Tambrus McGrew of Clermont, Florida. Ten grandchildren: Orlando “O.J.”McGrew, Orlando “O.T.” McGrew, Onkeese McGrew, Tremaine Mann-McGrew, Lynette Paige, Kaneisha Paige, Alena Paige, Edward Paige III, Donquell Paige and Demariel Paige. Five great grandchildren, one sister Seleta McGrew, three brothers Larry (Dorothy) McGrew, Timothy McGrew, Ernest McGrew and one foster brother Paul.  Five aunts, three uncles, three sister in-laws, four brother in-laws and a host of nieces, nephews, cousins, family and friends.

Millicent Paige was born in Memphis, Tennessee to the late James McGrew and Thelma Broadnax McGrew. She accepted Christ into her life at a young age and was baptized in 1963 at Snyder Chapel Missionary Baptist Church in Detroit Michigan. Millicent... View Obituary & Service Information

The family of Millicent Lucille Paige created this Life Tributes page to make it easy to share your memories.

Millicent Paige was born in Memphis, Tennessee to the late James...

Send flowers to the Paige family.