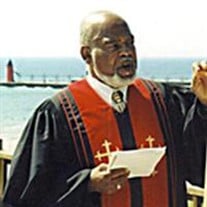 McKinley Columbus Harrell was born July 2, 1930 in Los Angeles, California. He departed this life peacefully surrounded by family members for a new life, free of pain and suffering on March 18, 2016. He was preceded in death by his wife of 60 years; Johnie Ruth Harrell, his parents; Rosetter Hill and Lee Andrew Harrell and one brother; Lee Timothy Harrell. He served in the United States Army with a tour in the Korean War. Rev. Harrell was called to the ministry many years ago, under the leadership of Pastor G. W. Wade at Lily Baptist Church. He was assigned to Pastor the United Peoples Community Church for 26 years. After he retired, he joined the ministry at Monument of Faith Church under the leadership of his daughter, Pastor Gwendolyn Johnson. Rev. Harrell met and married Martha Gonder on February 18, 2012. He then relocated to Kalamazoo, Michigan. While there he became a member of Christ Temple Church, under the pastorate of District Elder Tony F. Thomas. Rev. Harrell served in many capacities and organizations throughout the Jackson community. He was Secretary of the Southeast Ministerial Alliance and President of the NAACP. He worked hard to always support his family, while serving the community and the Kingdom of God. Many people will remember him working for Clark equipment, for the AFL-CIO and also as a City Building Inspector for the City of Jackson. After retiring from there he became a supervisor of security at Mac Steel. He leaves an awesome example of excellent work ethic. Due to his love of people and community, his contributions to are too numerous to mention. He loved fishing, hunting, cooking and baking but spending time with family was his utmost fulfillment. Rev. Harrell leaves to cherish his memory, his loving wife; Martha Harrell, four children; Chonita (Benjamin) Ali, Maurice A. Harrell, Charisse (McKinley) Chatman, all of Jackson, Michigan and Gwendolyn Johnson of Nashville, Tennessee; one sister; Rosie Hill of Dallas, Texas, thirteen grandchildren, twenty-two great grandchildren and three great-great grandchildren, several nieces and nephews and a special god-son; Pastor Larry M. Trice, Jr.

McKinley Columbus Harrell was born July 2, 1930 in Los Angeles, California. He departed this life peacefully surrounded by family members for a new life, free of pain and suffering on March 18, 2016. He was preceded in death by his wife of 60... View Obituary & Service Information

The family of Rev. McKinley Columbus Harrell created this Life Tributes page to make it easy to share your memories.

Send flowers to the Harrell family.