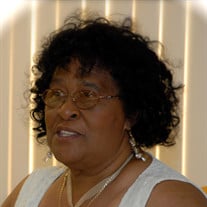 Who Can Find A Virtuous Woman ? Proverbs 31:10-31 Lilly “Maxine” Wilks Bridges was born on September 18, 1933 in the small town of Kosciusko, Mississippi (Oprah’s hometown) as the first-born child to her parents, James Davie Wilks & Eula Dodd Wilks. Growing up on the family farm, Maxine accepted the Lord as her Savior at a young age. Trusting & believing in the Lord was a haven for African American families in those days and times; and still is. On Christmas Day in 1952, Maxine married her childhood sweetheart and best friend, Henry “Otis” Bridges, Jr., whose family lived down the road about a mile away. The following year, Maxine and Otis left the south and moved north to Jackson, Michigan. To this marital union, eight (8) incredible children were born; 2 girls and 6 boys. Like her husband, Maxine worked at Clark Equipment in Jackson, Michigan, but she would not commit to full time work outside the home until her youngest child was five years old. Maxine was an extraordinary cook, a professional short-order cook, as well as a peach cobbler connoisseur. She loved to feed her family, neighbors, church members (in many ways, she ran a 24-hour restaurant & hotel). If someone ran out of food, was hungry, Maxine was on the job getting them fed—by either herself or someone else. Maxine was an active and devoted member of her church for *48* years (Community AME Church) where she & Otis worshiped the Lord faithfully. To raise funds for the church, Maxine hosted an Annual Family & and Friends Tea at the church obtaining donor pledges in numerous states other than Michigan; and Maxine cooked many a meal to sell by the plate in the community (again to raise funds for the church). If Maxine knew of someone who wanted to give clothes away, she took it upon herself to distribute the clothes to those in need, to give the clothing a new home and the recipients a new wardrobe. With all she did for others, she never missed a beat in caring for/cooking for her beloved husband & eight (8) children. As a wife and mother Maxine excelled to the standards of Proverbs 31:10-31, “Who can find a virtuous woman? For her price is far above rubies.” Maxine enjoyed gardening and loved flowers, especially “Dinnerplate Dahlias” her garden was a beautiful & remarkable sight—the front yard, front porch, side yard, along the driveway… Maxine enjoyed watching cooking shows and contests on TV; old western shows i.e., Gunsmoke, Bonanza & Big Valley; and of course, the PBS “Antiques Road Show.” One thing Maxine did not enjoy was watching news reports on TV about violence, shootings, stabbings, etc. and sometimes televised ball games. But of course, she enjoyed watching her children and grandchildren play in school sports etc. Maxine also loved to travel from Michigan to Washington to Virginia to Arizona to see her children and grandchildren. Maxine loved family get togethers, hearing the laughter, the sports team debates, the Spades card games, brought her immense joy. Following the sudden death of her beloved husband, Henry “Otis” Bridges Jr., of 40 years… Maxine carried the “Bridges Family” for 30 more years! She signed cards and gifts “Love, Ma and Pa” on behalf of herself and her husband, she encouraged her 8 children, 12 grandchildren and 4 great grandchildren to do their best, to be their best, to follow their dreams… to be successful in every way! As Daddy/Grandpa would say… “If you fall down, don’t stay there; get back up, & try again.” When God called Maxine to eternal rest, in the early hours of August 17, 2021, and just one month & one day shy of her 88th birthday... She was glowing in God’s Goodness, Grace and Glory while being surrounded by angels who escorted her to her heavenly home. Maxine’s Legacy of Love & Giving Back will be carried on by those she is loved by and survived by, two daughters; Denise Marie (Paul) Johnson of Seattle, Washington and Lorie Michelle (Grady) Smith, of Gilbert, Arizona, six sons; Dennis “Otis” Bridges of Seattle, Washington, Tommy Davis (Kimberly) Bridges of Edmonds, Washington, Michael Renaud (Deborah) Bridges of Farmington Hills, Michigan, Jerry Maurice (Carmelita) Bridges of Spanaway, Washington, Larry Darnell Bridges of Puyallup, Washington and Benny Ray-Wilks (Colleen) Bridges, Sr. of Seattle, Washington, ten grandsons; Davelle James Montez Bridges, Verdayne Jamarlo Johnson, Jalon D’Andre Johnson, Dominique Bridges, Benny Ray-Wilks Bridges II, Michael Chad Bridges, Chauncey Aaron Bridges, Leandro Marquisz “Otis” Bridges, Isaiah Maurice Wilks Bridges and Maxwell James Floresca Bridges, one granddaughter, Larissa Marie Bridges, two great granddaughters; Monea Marie Bridges and Jhadea Dior Johnson, three great grandsons; Rashad Davelle Lynn Bridges, Jhace D’Andre Johnson &and Royce Antonio Bridges, one great-great granddaughter; Leayla Adoree Simpson, one brother-in-law; Willie Lee “Big John” (Jeanette) Bridges, and a countless host of extended family members, nieces, nephews, cousins, fellow church members, former co-workers… Maxine was preceded in death by her parents, James Davie Wilks and Eula Dodd Wilks, beloved husband of 40 years; Henry “Otis” Bridges, Jr., her sisters; Honey Wilks, Jeannie Wilks, and Joanne Wilks-Ashford, brothers; William Wilks, Harvey Wilks, Freddy Wilks, Jimmy Wilks and Dan Wilks, grandson; Jeremiah “Otis” Smith, and son-in-law; Paul V. Johnson.

The family of Maxine Bridges created this Life Tributes page to make it easy to share your memories.

Send flowers to the Bridges family.