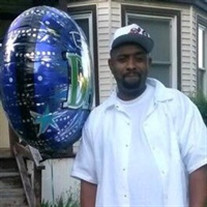 Marvin Devaughn Lippett, Jr. graced this world on February 1, 1975 in Detroit, MI to the loving union of the late Marvin and Dianne Lippett. He confessed his life to Christ at an early age and later attended New Breakthrough Church International.  He was educated in Detroit Public Schools. He worked various jobs throughout his life.  He was currently employed at Niagara LaSalle. Lil Marvin as he was so affectionately known, was everyone’s favorite. Everybody loved being around Lil Marvin, he always smiled and made you laugh, sometimes until you couldn’t breathe. Lil Marvin enjoyed quite nights sitting on the porch, taking a sip of his favorite cocktail.  He was the best dancer that you ever seen, he loved to paint and dress nice all the time. He was a loving father who cherished his two girls. He was always mild-mannered and caring, he helped a lot of people through troubled times. If you depended on him, he was always there.  He enjoyed trying to cook!! He was always a good friend to everyone, he was a kind thoughtful brother, friend and uncle. Lil Marvin will truly be missed by many for a long time, it seems as though that you can hear him saying right now, “Man WTF”, lol.. Marvin made his transition from labor to reward on July 15, 2018, in his passing he leaves to cherish his memory: two daughters Jessica Lippett (Twanna), Dashayla Lippett (Shareka, who proceeded him in death), seven siblings: Aaron Lippett (Shelia), Marvella Butler (Fred), Leon Lippett (Tamika), James Crenshaw III, Lona Crenshaw, Neda Dillard (Tony) and Jasmine Crenshaw. Two sister n laws, Demea Roberson and Marketta Anderson.  One Aunt Doretha Lippett, two uncles Larry Butts and Darryl Perryman,  a very special lady Linda Wise, a cool brother ‘n law, Victor Jackson,  a dear friend Avita Townes and host of other nieces, nephews, cousins and friends.

Marvin Devaughn Lippett, Jr. graced this world on February 1, 1975 in Detroit, MI to the loving union of the late Marvin and Dianne Lippett. He confessed his life to Christ at an early age and later attended New Breakthrough Church International.... View Obituary & Service Information

The family of Marvin DeVaughn Lippett created this Life Tributes page to make it easy to share your memories.

Send flowers to the Lippett family.