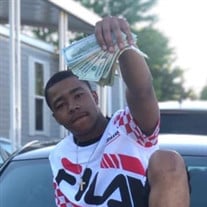 Marshune Potts Jr. was brought into the world with welcoming eyes and a bright smile on December 12,1999. He was a son, proud father, brother, and uncle affectionately known to many as “Man-Man, Da-Da (dad), and Lil’ Marty”. In his earlier years, Marshune went to Sankofa Elementary for kindergarten. He then graduated from Shabazz Academy. From then on, he attended J.W. Sexton High-School until achieving his high school diploma. He enjoyed camping, swimming, zip-lining, cabin stays, and playing basketball actively, developing his competitive and teambuilding skills. He worked and volunteered at Reach Out Ministries where he also helped build their ceilings and cut grass for those in nearby communities. He also spoke to and helped pass out food to those experiencing temporary homelessness at the Advent House Ministries. Marshune’s greatest accomplishment was creating and raising his daughter Azariah who has been Marshune’s pride and joy. He was always protective and adamant over her and would frequently travel to be with her and pick her up regardless of where she was. She was his priority, and he did everything he could to provide for her. Each store he went to, if there was an item, he could purchase for her, he was sure to get it. It was never a moment he wanted to be apart from her. His social media, although full of other things, was saturated by pictures and videos of his precious daughter. Marshune was also known to be highly loyal to his friends and family. He was a compassionate and loving individual you could count on. He was an immensely selfless, soft-hearted person who did his best to help others throughout his life. Oftentimes, he gave those around him clothes, shoes, money, and his time donations which included recreational activities, volunteer work, or hours spent in laughter. He greatly enjoyed being a source of light and strength to others. Marshune loved telling teasing jokes, wildly drawn out entertaining stories; anything to bring smiles and laughter to another and brighten their day. He loved music. In his free time, he would freestyle, create his own raps, and listen to a variety of musical lyricists he was inspired by. He also had the joy of having an overprotective loving dog (Sparkle) for 4 years that he absolutely cherished. Marshune moved to Minneapolis to create a better future for himself and his daughter. His goal was to work, get his own place, and put himself back through school to continue to pursue his entrepreneurial endeavors. He will be remembered for his hard-work, his honesty, generous smile and loud laugh he kept for family and friends, as well as the magnitude of kisses he’d make them receive to express his ever-lasting love. We have no doubts that Marshune still has our backs wherever his spirit is, we know he’s pulling for his family and friends. Marshune showed others through action what love, loyalty, hard work, and support meant. Marshune precedes his loving and doting grandparents: Elmo Potts, Nathan Whitted (Grandfathers); Hilda Floyd, Annette Potts (Grandmothers); Marshune Potts Sr. (father), Valerie Floyd (mother), Vashune’ Potts (sister), Shamece Rosencrans (Sister), Levi Rosencrans (nephew) along with Azariah Potts (daughter) who will carry his memory and legacy forward. He also leaves behind a host of aunts, uncles, and cousins. People who loved him: Julian “Juju” Shaner (best-friend), Elijah “Eli” Farrow (friend and associate), Maijauna “my-onna” Williams (sister in love)

The family of Marshune Mantell Potts Jr. created this Life Tributes page to make it easy to share your memories.

Marshune Potts Jr. was brought into the world with welcoming...

Send flowers to the Potts family.