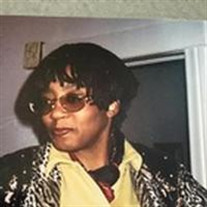 Marsha Anne (Smith) Capps, 66, of Jackson, Michigan entered into eternal rest after a brief illness on Friday, June 17, 2016 at her home and surrounded by her loving family. Marsha was born in Jackson, Michigan on October 26, 1949. She accepted Christ at an early age at Second Baptist Church under the leadership of Reverend Amos Polk Williams. Her faith in God remained strong despite her inability to attend services. Marsha attended the Jackson Public School system graduating from Parkside High School in 1968 and attended Western Michigan University. Marsha was later employed by the W. A. Foote Memorial Hospital, the Jackson Citizen Patriot and Parkside High School. Her fascination with stylish clothing and her passion for modeling later led her to Detroit, Michigan to attend modeling school. After her modeling debut, she returned to Jackson and was accepted into the State of Michigan Department of Corrections Officers Training Academy. She was employed by the Department of Corrections until her health would no longer permit her to work. She retired after 20 years of faithful service. Marsha had a unique and creative style for clothing and interior design. She had a natural eye for beautiful things. If anyone expressed a need for an item, Marsha could produce it, no matter what the item may have been, or the color. If she didn’t have it, she would definitely find it for you. She loved to shop! As her mobility became limited, her integrity remained intact. Marsha would dress up in her color coordinated clothing, shoes, gloves, hats, scarves, purses, coats and sunglasses, if needed, and go to Anna’s Porch Cafe for lunch once a week. She loved their Tomato Basil Soup and Tuna Sandwiches, as well as their beautiful and unique furniture inventory. It was not unusual to visit Marsha’s home and find her sitting in a chair, dressed to a tee, watching television in her lavish pajamas, robes and matching slippers. She loved discussing political views and other controversial issues and would tell you exactly how she felt. Prior to her death and while bedridden, we would think Marsha was sleeping, however, if she heard anything on the television about the upcoming elections, presidential candidates, or the country’s political climate, she would open her eyes, voice her opinion and go back to sleep. Marsha was preceded in death by her parents; Mary H. Johnson and Robert (Bruiser) Smith, her grandparents; Revered George and Verlia (Carter) Brown and Beatrice Smith, and a very special companion for 15 years after raising her children; her dog Byder. Marsha leaves to cherish her many memories her immediate family; two sons; Leland and Deville Elliott, one daughter ; Marcia (Lester) Cox, her stepfather, who raised her ; Robert Johnson, two sisters; Roxanne (Andre) Turner and Robin Johnson Robinson, three granddaughters; Renasia, Zaharah and Kira, four grandsons; Daryn, Trenton, Tre’jen and Koye. She also leaves her other siblings; Garland (Linda) Williams, Edward (Germaine) and Richard Woods, Navoline, Eric, Robert Smith, Kito (Jaritza) Smith, and Robin Jones along with a host of aunts, uncles, nieces, nephews, cousins, and very special friends; Gloria Dailey and Velma Robison Stewart.

Marsha Anne (Smith) Capps, 66, of Jackson, Michigan entered into eternal rest after a brief illness on Friday, June 17, 2016 at her home and surrounded by her loving family. Marsha was born in Jackson, Michigan on October 26, 1949. She accepted... View Obituary & Service Information

The family of Marsha Anne Capps created this Life Tributes page to make it easy to share your memories.

Send flowers to the Capps family.